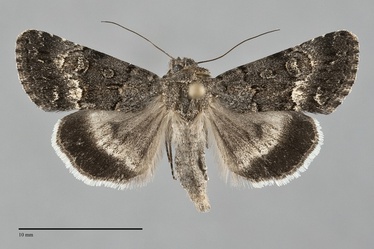 Sympistis parvanigra is a small, dark gray moth (FW length 10 - 13 mm) that flies at middle to high elevations during the summer and early fall. It has white in the subterminal area and a light gray hindwing with a broad black marginal band. The forewing is slightly mottled dark gray, slightly lighter basal to the antemedial line and darker on the distal wing. The subterminal area is white to light whitish tan with a sprinkling of dark scales medially, fading to dark gray laterally. The antemedial line is black, irregular and oriented straight across the wing. The postmedial line is black medially and white laterally, sometimes with a partial gray outer component. It is weakly scalloped and is convex around the reniform spot, then nearly straight to the trailing margin below the spot at a variable angle. The subterminal line is pale tan, thin, irregular, and incomplete, usually strongest near the trailing margin. A series of black dots comprises the terminal line. The fringe is dark gray, sometimes slightly checkered with black. The hindwing ground color is pale gray to brownish white, suffused with gray toward the base, with a dark gray discal spot and wide black marginal band. The hindwing fringe is white with a dark gray base. The head and thorax are dark gray. The male antenna is filiform.

This species is most likely to be confused with Sympistis aterrima, a nearly black moth with white bands on both wings, with which it flies in western Oregon. The medial hindwing of S. aterrima is black, not gray is in A. parvanigra. Sympistis tenuifascia, found in the mountains in the eastern part of the Northwest, is also similar. It has a dark postmedial line on the dorsal hindwing that S. parvanigra lacks, and usually has dark brown than dark gray forewing. Stylopoda groteana, a small moth with similar dark gray and white forewings that flies in southeastern Idaho, is also similar but its hindwing is entirely black rather than banded with light and dark. Its range in our region does not overlap that of S. parvanigra.

This species is widely distributed in open mountain meadows or on rocky ridgetops at high elevations in the Rocky Mountains and Cascades.  It appears to be sporadic and rare in most areas, but may be locally common.

This species is found across the southern third of British Columbia and in adjacent northeastern Washington. It occurs in the Cascade Range, most commonly along the east side of the crest, as far south as central Oregon.

The range of this species might be limited to the Pacific Northwest.

No information is presently available regarding larval foodplants of this species. It probably feeds on beardtongues (Penstemon spp.) in the Scrophulariaceae based on the preferences of related species.

The flight period of S. parvanigra is summer and early fall. It has been collected from early June until early September.  It is nocturnal and comes readily to light.