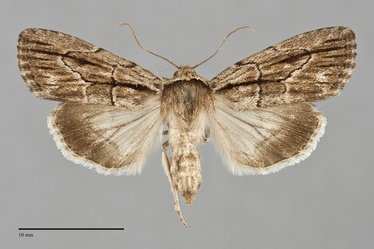 Sympistis badistriga is a small to medium-sized moth (FW length 13 - 15 mm) that barely enters eastern British Columbia and flies during the summer. It has a streaky gray-brown forewing with thin black transverse line and two thicker black streaks at the wing base and in the cell. The forewing is smoothly streaked longitudinally with a lighter grayer costa, lighter gray-brown between the veins, and a light area near the anal angle from a diffuse subterminal line. A series of thin black lines between the veins extend across the distal subterminal area to the wing margin. A thick and slightly indistinct black line extends from the base to the postmedial line in the fold. A similar, but thinner, line extends from the orbicular spot to the outer margin through the cell and reniform spot. The basal line is reduced to a dot on the costa or is absent. The antemedial and postmedial lines are similar, black with pale brown components outside the median area. The antemedial line is strongly angled toward the forewing base on the costa, then bent to traverse the rest of the wing perpendicular to the trailing margin. The postmedial line is narrowly excurved around the end of the cell to for a long loop toward the outer margin, then slightly concave toward the base as it curves to the trailing margin just lateral to the mid-wing. The median line is absent. The subterminal line is pale brown, usually a diffuse patch near the trailing margin and absent elsewhere. The terminal line is thin and dark gray. The fringe is brown, weakly checkered. The orbicular spot is absent or a pale oval filled with the ground color. The reniform spot is a dark focal thickening along the black line through the cell. The claviform spot is not identifiable; it has likely been incorporated as the median portion of the basal dash. The hindwing is pale gray-brown with a faint gray discal spot, darker gray postmedial line, and ill-defined gray marginal band, and a thin dark terminal line. The fringe is yellow at the base and white at the edge separated by a thin gray median line. The head, collar, and posterior thorax are smooth tan, darker immediately posterior to the collar. The male antenna is filiform.

This species is similar to Sympistis dinalda and Sympistis fifia. These three species and Sympistis habilis were previously placed in the genus Homohadena, now considered to be a synonym of Sympistis. Sympistis badistriga is most similar to S. dinalda which also occurs in eastern British Columbia. It has a powdery gray forewing without brown mottling and lacks pale components to the antemedial and postmedial lines. Sympistis fifia has extensive dark brown on the wing and thorax, unlike the other two species.

This species is widely distributed in moist forests throughout eastern North America, extending westward to the Rocky Mountains.

This species occurs from eastern central North America as far west as central British Columbia. It is found from southern Canada to Florida near the East Coast, with the range extending west to Texas and Arizona across the South.

This species is a foodplant specialist feeding on honeysuckle (Lonicera spp.) in the Caprifoliaceae.

The adults fly during the summer, reportedly in July and August in the East (Forbes 1954). It is nocturnal and comes to lights.