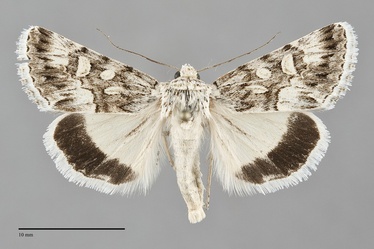 Sympistis tartarea is a small to medium-sized moth (FW length 13 - 15 mm) that flies over sandy soil in west-central Oregon during the fall. It has yellow, off-white, and gray forewings with pale spots and a similar pale subterminal area with a serrate lateral margin, and a pale hindwing with a black marginal band and white fringe. The ground color of the forewing is light yellow-gray with a slight greenish hue, darker gray in the lateral subterminal area near the apex. Most of the medial subterminal area is yellowish off-white, interrupted by the ground color between veins M3 and CuA1, and in the terminal area at the anal angle. The veins are dark distal to the postmedial line. The transverse lines are dark gray to black. The antemedial line is zigzag, perpendicular to the trailing margin. A median line is gray, variable in strength, and interrupted where it crosses the reniform spot. The postmedial line is weakly scalloped, black followed by off-white, excurved near the lateral reniform spot and then nearly straight at an oblique angle toward the base below the spot. The subterminal line is pale, irregular and incomplete, with a series of dark gray to black wedge-shaped marks between the veins medial to the line that accentuate the irregular lateral margin of the subterminal area. The terminal line is thin, black. The fringe is white with a light gray median line. The three spots are thin and black filled with the off-white color of the subterminal area, sometimes with pale gray centrally. The orbicular spot is slightly oval. The reniform spot is D-shaped or boomerang-shaped. The claviform spot is moderately large, extending to the median line. The hindwing is slightly brownish off-white with weak gray basal suffusion, a broad blackish gray marginal band, and a pure white fringe. The head and thorax are pale yellow-gray. The collar has a thin subbasal line and gray-brown transverse barring elsewhere. The male antenna is filiform.

This species is the palest of several fall-flying Sympistis species and the only one in our region that combines a white forewing fringe with pale-filled spots and subterminal area.

This species is narrowly endemic to very dry sagebrush steppe on fine sandy soil. It is very rarely collected and is only known from a handful of specimens.

This species is restricted to low hills on the western edge of the Snake River Plain in west-central Oregon.

This species is not known to us from outside of the Northwest.

No information is presently available regarding larval foodplants of this species, but it may feed on penstemons (Penstemon spp.) in the Scrophulariaceae based upon the habitat.

This species flies in mid-September to early October. It is nocturnal and comes to lights.