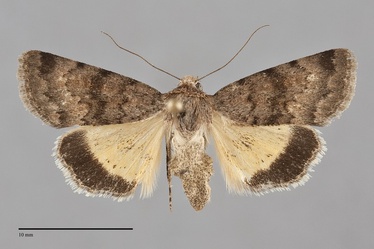 Sympistis hayesi is a small moth (FW length 12 - 13 mm) that flies in the eastern and southeastern parts of the Northwest during late summer and fall. It has an orange-brown forewing with the markings limited to dark transverse lines and a yellow and black hindwing lacking basal suffusion. The forewing is smooth orange-brown, sometimes with a slight to strong red tint, lightest in the medial subterminal area at the postmedial line. A dark gray spot is usually present on the costa abutting the subterminal line. The basal, antemedial, medial, and postmedial lines are gray. The antemedial line is mildly irregular, oriented straight across the wing. The postmedial line is mildly scalloped, focally excurved around the reniform spot then nearly straight to the trailing margin below the spot. The pale subterminal line is preceded by a more prominent gray shade, usually similar in darkness to the median line. The fringe is similar to the ground color. The orbicular and reniform spots are faint, pale, and filled with the ground color. No claviform spot is present. The hindwing is pure yellow without significant basal suffusion. A black marginal band is present, and traces of a postmedial line are sometimes evident on the veins, but there is no discal spot. The hindwing fringe is tricolored with a yellow base, gray median line, and white edge. The head and thorax match the forewing color. The male antenna is filiform.

This species is most likely to be confused with Sympistis sandaraca, a more mottled orange-brown species with more ochre-colored hindwings with a gray postmedial line.

The relationship of S. hayesi and Sympistis regina is unclear to us. The former species is found in the southwest while the latter is predominantly found on the Great Plains. Significant overlap in appearance suggests that these might be regional forms of the same species.

This species is widely distributed in western North America.  It occurs in open grasslands and dry meadows at higher elevations in the Rocky Mountains, but also occurs in juniper woodlands and in open sagebrush steppe at lower elevations in the Great Basin region.  It is usually rare and sporadic, but may be locally common.

The Northwest distribution of S. hayesi is southeastern Oregon and southern Idaho.  It appears to be most common in southeastern Idaho in our region.

Sympistis hayesi is found in the Southwest and central and southern California ouside of our region. The range of S. regina includes the Great Plains to southern Alberta.

No information is presently available regarding larval foodplants of this species, but penstemons (Penstemon spp.) in the Scrophulariaceae are suspected as foodplants based upon the habitat.

This species flies in the fall, like many other arid-land Sympistis species, usually from late August through September. It is nocturnal and comes to lights.