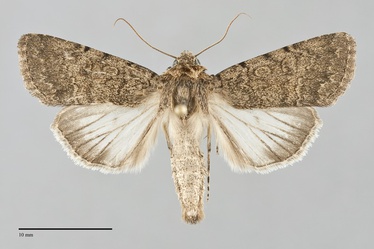 Sympistis goedeni is a medium-sized (FW length 16 - 17 mm) moth that flies in southwestern Oregon during the late summer. It has a powdery brown forewing that is gray distally, dark spots on the costa, an oval reniform spot, and pearly light gray hindwings with a gray marginal band. The forewing is gray-brown with a slight yellow tint heavily sprinkled with dark scales. The wing distal to the postmedial line is more even and slightly darker gray. The basal, antemedial, and postmedial lines are gray and double filled with a light shade of the ground color. The median line is gray. All of these lines are thicker at the costa to form four equidistant spots on the inner two-thirds of the wing. The basal line is short and dark. The antemedial line is faint below the costa, slightly irregular and oriented transversely across the wing. The median is strongly oblique to the costa, turning 90° in the reniform spot toward the wing base. The postmedial line is weakly scalloped, similar in course to median line, turning toward base at anterior cell. The subterminal line is similar in color to the filling of the other lines, irregular and moderately toothed on the veins. The terminal line is variable, usually a series of spots between the veins but often very faint. The fringe is the same color as the terminal area with pale spots on the ends of the veins. The spots are outlined in gray and filled with the ground color peripherally and gray centrally. The orbicular spot is oval and the reniform spot is wide, kidney-shaped. The claviform spot is small. The hindwing is light whitish gray with a slight sheen, darker gray in females, with an ill-defined gray marginal band, dark veins, and a small discal spot. The hindwing fringe is tricolored, yellow, gray, and white. The head and thorax are brown with a slightly lighter collar. The male antenna is filiform.

This species is unlikely to be confused with other Sympistis species in the Northwest. Two other species, Sympistis glennyi and Sympistis acheron, have brown forewings. The lines and spots are much darker in both of these species and the hindwings are darker. Sympistis goedeni is superficially similar to several brown Euxoa species. Males can be distinguished by the shiny dorsal hindwing, akin to that of Peridroma saucia in the Noctuini, and by its filiform antenna, serrate in these Euxoa species. Females must be distinguished by subtle features of the pattern such as the oval orbicular spot and gray wing distal to the postmedial line without resorting to dissection.

This species is locally endemic to dry grasslands and oak savanna at low elevations in southwest Oregon.  It appears to be very local and sporadic.

Sympistis goedeni is only found in southwestern Oregon in the Pacific Northwest.

The range of this species extends south to the vicinity of Los Angeles through coastal California.

The flight period of S. goedeni is late August and the month of September. It is nocturnal and comes to light.