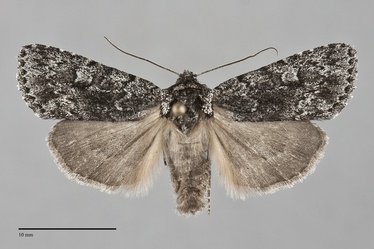 Sympistis anweileri is a small to medium sized moth (FW length 14 - 17 mm) that flies in dry forests in British Columbia to northern Oregon during late summer and fall. It has a mottled, powdery dark gray forewing marked with a wide reniform spot and strongly dentate postmedial line. The forewings appear short and broad. The color is slightly variable, usually powdery charcoal gray, but sometimes gray with a slight brown tint. The base of the wing and anterior margin are slightly lighter gray. The portion distal to the postmedial line is strongly mottled with light gray and black, usually with a prominent light gray patch from the postmedial line to the anal angle, a large diffuse black patches in the fold, and black shading medial to the subterminal line near the apex. The basal line is a small black spot on the costa. The antemedial and postmedial lines are black with light gray opposite the median area. The antemedial line is irregular but not strongly toothed, sometimes indistinct on the mid-wing. The anterior segment is strongly oblique toward the base of the wing, and the line touches the medial orbicular spot. The postmedial line is moderately to strongly dentate, excurved around the end of the cell approximately half the distance from the reniform spot to the outer margin, then oblique toward the base below the reniform spot to the trailing margin. The median line is a dark spot on the costa. The subterminal line is poorly defined, usually only evident as transition from dark to light near the apex and as a diffuse pale gray spot near the anal angle. The terminal line is gray, usually not prominent but occasionally forming a series of dark spots between the veins. The fringe is dark gray, sometimes weakly checkered. The orbicular spot is black, oval, often indistinct, with filling of the gray ground color. The reniform spot is black, widely kidney-shaped, and filled with light gray except for dark gray at the posterior end. The claviform spot is black, indistinct, forming a spot in the medial median area or a line across the area. The hindwing is gray with slightly darker discal spot, slightly scalloped postmedial line, marginal shade, and thin terminal line. The fringe is yellow and gray at the base with a white edge. The head is grizzled gray. The collar is even dark gray with a light gray edge. The rest of the thorax is grizzled gray with darker edges on the tegulae. The male antenna is filiform.

This species is found in low to middle elevation forest habitats, including mixed hardwood-conifer forests and open ponderosa pine forests.  It is usually sporadic but can be common in the appropriate habitat.

Sympistis anweileri is found in forests in southern British Columbia and Washington east of the crests of the Coast Range and Cascade Mountains. It has been collected along the east slope of the Cascades in Washington, in the northeastern part of Washington, and in the Blue Mountains of both Oregon and Washington.

The range of this species includes Alberta and Montana outside of the Northwest region.

No information is presently available regarding larval foodplants of this species, but it probably feeds on bearberry (Arctostaphylos uva-ursi) and huckleberries (Vaccinium spp.) in the Ericaceae based upon related species and habitat association.

Sympistis anweileri flies in the late summer and fall, with records from mid-July to mid-September in our region. It is nocturnal and comes to lights.