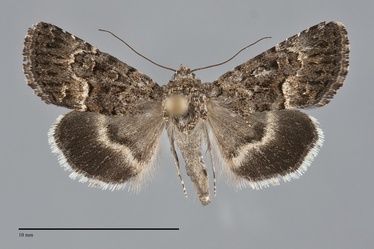 Sympistis tenuifascia is a very small moth (FW length 9 - 10 mm) that flies in the mountains in the eastern parts of the Northwest during the summer. It has a dark brown forewing with a light-filled postmedial line and light tan hindwing with a black postmedial line and marginal band. The forewing is dark gray brown, sometimes with a warm orange tint. The distal wing is darker. The cell is dark between the spots and a black spot is located on the costa medial to the subterminal line. The lines and outlines of the spots are black. The basal, antemedial, and postmedial lines are double, filled with light gray-brown (former two lines) or white to pale tan (postmedial line). The antemedial line is slightly irregular, nearly perpendicular to the wing. The postmedial line is narrowly excurved around the reniform spot and straight to the margin or slightly directed toward the anal angle below the reniform spot. A dark median line is darkest near the costa. The pale subterminal line is thin and very irregular in course. It is preceded by a dark gray shade or a few small black wedges. The fringe is checkered dark brown and dark gray. The orbicular spot is oval, often incomplete anteriorly and posteriorly, and filled with the ground color. The reniform spot is similar, usually with a thin light inner outline, also incomplete toward the costal and trailing margins and filled with the ground color. The claviform spot is thin, small, black, and filled with the ground color. The hindwing ground color is pale tan with gray-brown basal suffusion. The black discal spot and postmedial line are fused. A wide black marginal band is present. The fringe is white with a dark gray base. The head and thorax are dark brown-gray. The male antenna is filiform.

This species resembles Sympistis parvanigra with which it flies at some locations in eastern British Columbia. This species has a dark gray forewing without brown color and the base of its hindwing is light whitish gray without a postmedial line, not light tan with a line as in S. tenuifascia.

This species flies at middle to high elevations in the mountains, favoring open rocky ridgetops and cliffs.

Sympistis tenuifascia is found in the mountains of southeastern British Columbia and the Blue Mountains in southeastern Washington.  It has also been collected in northern and south-central Idaho.  This moth is likely to be more widespread near the Rocky Mountains than these records suggest.

This species flies in the Rocky Mountains at least as far south as Colorado.

No information is presently available regarding larval foodplants of this species. It is associated with beardtongues (Penstemon spp.) in the Scrophulariaceae in Columbia County, Washington (J. Troubridge personal communication).

Adults are on the wing during the summer from late July to early September. This species is nocturnal and comes to lights.