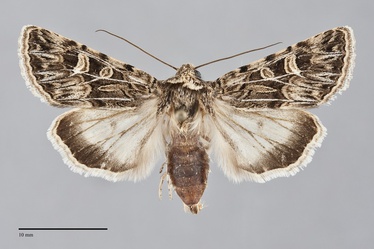 Sympistis sesmu is a streaky, dark brown medium-sized moth (FW length 15 - 18 mm) that flies near basalt outcrops in steppe during September. It has a round or asymmetrically oval orbicular spot, a black-banded off-white hindwing, and white fringes with dark bases on both wings. The forewing is dark brown, slightly lighter gray-brown on the base and in the subterminal area, especially near the postmedial line. The veins are pale to the mid-subterminal area and dark further distally. Pale gray or brown extends along several veins from the subterminal area to the margin, producing a saw-tooth appearance to the distal wing, which is accentuated by black wedges between the veins medial to the subterminal line and the irregular course of this line. The basal, antemedial, and postmedial lines are brown or black, double filled with light brown. These lines and the median line are thickened to form spots on the costa. The basal line is located near the wing base. The antemedial line is jagged. The postmedial line has black medial and light brown lateral components and is weakly scalloped. It is tightly excurved around the reniform spot and nearly straight at an oblique angle toward the base from the apex of the curve to the trailing margin, touching the posterior reniform spot. The median line is gray, closely parallel to the posterior postmedial line and bent toward the base in the cell. The subterminal line is light brown, irregular, and touching the outer margin in several spots. It is preceded medially by a series of long black wedges and chevrons of varying sized and followed laterally by less well-defined dark gray spots. The terminal line is black. The fringe is broad, white at the edge with a yellow and brown base. The spots have black outer and light yellow-brown inner outlines and are filled with brown and central pale lines. The orbicular spot is ovoid, tilted toward the base anteriorly. The reniform spot is ovoid to kidney-shaped. The claviform spot is moderately long and apically pointed, with the tip reaching over half the distance across the median area. The hindwing ground pale whitish gray with slight gray basal suffusion, gray veins and thin discal spot, traces of a postmedial line, and a sharply-demarcated black marginal band. The hindwing fringe is tricolored, yellow basally and white distally with a thin brown median line. The head is brown. The collar is barred mottled gray brown, pale tan, and black with a pale edge. The rest of the thorax is mottled gray and brown. The male antenna is filiform.

This species is the darkest of several similar Sympistis species that fly in steppe habitats during the fall. It can be distinguished from the other species by dark bases in the fringes of both wings.

This species is widely distributed in juniper woodlands and sagebrush steppe at middle to low elevations east of the Cascades, but is usually rare and sporadic. It is often associated with basalt outcrops and canyons. It can be moderately common in the proper habitat.

Sympistis sesmu is widely distributed in eastern Washington and Oregon and southern Idaho. It is found as far north as the northwestern part of the Columbia Basin in Washington.

We are unaware of records of this species from outside of the Pacific Northwest.

This species flies in the fall, usually beginning in mid-September. It is nocturnal and comes to lights.