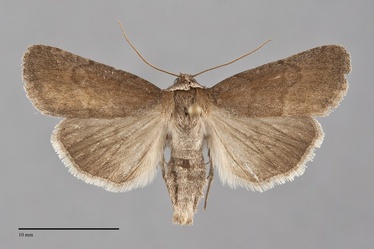 Sympistis stabilis is a smooth, red-brown small to medium-sized moth (FW length 13 - 16 mm) that flies in open forests and shrublands east of the Cascade crest during the summer. It has smooth darker antemedial and postmedial forewing lines and a silver gray-tipped thoracic collar. The forewing color is very slightly paler on the posterior half and has slightly more of a red tint in the cell than elsewhere. The veins and costa are slightly darker gray-brown. The pattern is very limited, consisting of smooth dark gray-brown antemedial and postmedial lines and a pale area at the site of the reniform spot. The antemedial line is smoothly excurved. The postmedial line is focally excurved at the end of the cell, perpendicular to the axis of the wing below the cell, and slightly bent toward the base near the trailing margin. Other pattern elements are absent. The hindwing is dark brown-gray, gradually darkening toward the outer margin, with slightly darker veins, discal spot, and terminal line. The hindwing fringe is tricolored yellow, gray, and white. The head and most of the thorax is reddish gray-brown, but the tip of the collar is silvery gray. The male antenna is filiform.

This species can be readily identified despite its relatively plain brown color by the contrasting pale-tipped collar. It is unlikely to be misidentified if this feature is recognized.

This species is widely distributed in western North America within moist, open forest or brushland habitats.  In the Pacific Northwest, it is common throughout the Rocky Mountain region in canyonlands along streams, mixed hardwood-conifer forests, and in open ponderosa pine forests at middle elevations.

This species is most commonly found in the eastern part of the Northwest, usually on the east side of the Columbia Basin and further east. Occasional specimens have been found on the east slope of the Cascades.

This is a foodplant specialist feeding on snowberry (Symphoricarpos spp.) in the Caprifoliaceae.

This species flies during the summer, with Northwest records from June to late August. It is nocturnal and comes to lights.