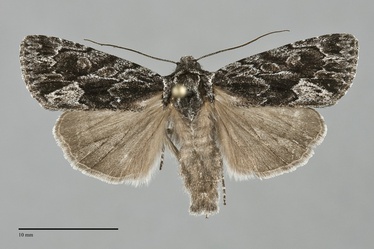 Sympistis californiae is a medium-sized moth (FW length 15 - 17 mm) that flies in dry forests along the Cascade Mountain axis as far north as southwestern British Columbia during late summer and fall. It has a mottled, dark gray forewing with a pinebark-like pattern. The forewing appears short and broad with a saw-tooth outer margin. The ground color is powdery charcoal gray. The posterior half of the wing is darker blackish gray from the base to the distal median area. The anterolateral median area is usually similar dark gray, bordered medially by the oblique anterior median line. The wing distal to the postmedial line is strongly mottled with contrasting light gray and black. A trapezoidal light gray patch from the postmedial line to the anal angle is sharply demarcated medially by the postmedial line and anteriorly by a black patch in the fold. This patch has an oblique straight posterior margin but is more diffuse anteriorly. A smaller black patch is at the costa medial to the subterminal line. The basal line is a black spot on the costa. The antemedial and postmedial lines are black with light gray outside of the median area. The antemedial line is sharply dentate on the veins. The anterior segment is strongly oblique toward the base from the medial orbicular spot to the costa. The postmedial line is strongly dentate, widely excurved around the end of the cell reaching half the distance from the reniform spot to the outer margin, oblique toward the base below the reniform spot where it turns perpendicular to the trailing margin. The median line is dark gray, strongly oblique from anteromedial to posteromedial to mid-wing and then absent on the posterior wing. It appears to continue to the anal angle as to the posterior margin of the black patch on the distal wing. The subterminal line is poorly defined, evident as a transition from dark to light near the apex and as a diffuse pale gray spot near the anal angle. The terminal line is a series of black triangles which accentuate the serrate margin. The fringe is dark gray, weakly checkered. The orbicular spot is black with an inner pale gray line, oval, with central filling of the gray ground. The reniform spot is black, broadly kidney-shaped, and filled with light gray except for dark gray at the posterior end. The claviform spot is black, indistinct, forming a line across the median area. The hindwing is even brown-gray with faint postmedial line, dark veins, and thin terminal line. The fringe is white with a light gray base. The head and thorax are mottled gray. The collar is more uniform dark gray with a light gray edge. The edges of the tegulae are black.  The male antenna is filiform.

This species is endemic to brushlands and forests along the West Coast.  In the Pacific Northwest, it is common in dry brushlands and mixed hardwood-conifer forests with manzanita in the Siskiyou Mountains, and in mixed hardwood-conifer forests or open ponderosa pine forests with manzanita and bearberry along the east slope of the Cascades.

This species occurs in the Siskiyou Mountains of southwestern Oregon, and in the Cascade Mountains from southern Oregon to southern British Columbia. It is uncommon north of Oregon.

Given its name, it is logical that the range of this species extends into California. It is recorded from the Sierra Nevada and Transverse Ranges. It probably also occurs in the Klamath Mountains since it is found in nearby southwestern Oregon.

The flight period of S. californiae is late summer and fall. Records from the Pacific Northwest extend from late July to mid-September. It is a nocturnal moth that comes to lights.