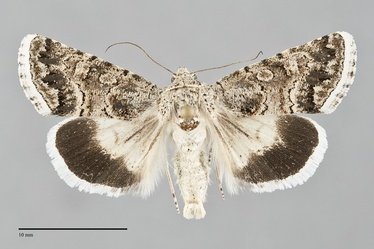 Sympistis iricolor is a small to medium-sized (FW length 13 - 15 mm) sandy gray-brown moth that flies in sandy deserts during the fall. It has a sprinkling of dark iridescent scales on the basal and distal forewing, an off-white hindwing with a broad black marginal band, and wide white fringes on both wings. The forewing is medium-dark gray-brown, mottled darker gray in the subterminal area, with powdery carborundum-like metallic gray and black scales on the posterior wing base and entire subterminal area. The basal line is black, thin, and short. The antemedial line is partially double with black outer and a faint interrupted gray inner line, filled with light tan. It is slightly irregular and smoothly excurved. A gray median line runs closely parallel to the postmedial line below the reniform spot and turns toward the base anterior to the spot, darkest on the posterior half of the wing and on the costa. The postmedial line has black inner and pale tan outer components. It is narrowly excurved lateral to the reniform spot, touches the lower reniform spot, and turns to meet the trailing margin at a right angle below the spot. The pale tan subterminal line is irregular and blotchy, preceded by a dark gray to black shade that contains a few black wedges between the veins on the mid-wing. The outer margin is slightly scalloped with a dark terminal line. The forewing fringe has a pure white base and faintly checkered white and gray edge. The orbicular and reniform spots are outlined in thin black lined with pale brown and are filled with the darker ground color. The orbicular spot is round to slightly oval. The reniform spot is kidney-shaped or weakly figure-eight shaped, open posteriorly. No claviform spot is present. The hindwing is pale brownish white with light gray basal suffusion, a thin light to dark gray discal spot and veins, and a wide dark blackish gray marginal band. The hindwing fringe is wide and pure white. The head and thorax are sandy gray-tan. The male antenna is filiform.

Sympistis iricolor can be identified by the sandy tan color forewings dusted with iridescent black scales, off-white hindwing with a black marginal band, and wide white fringes on both wings. Other fall-flying Sympistis species that fly in steppe habitats lack the iridescent scales and most lack the white forewing fringe. The only other species with a pale forewing fringe, Sympistis tartarea, has pale-filled forewing spots. It has a very limited distribution in east-central Oregon.

This species is widely distributed in western North America on the dry short-grass prairies of the Great Plains, and on very dry sagebrush steppe of the Great Basin region.  It is closely tied to sandy soils in the Northwest. It is usually sporadic, but may be locally common where it occurs.

Sympistis iricolor is found in the western portion of the Columbia Basin in Washington, in far eastern portion Oregon, and on the Snake River Plain in southern Idaho.

No information is presently available regarding larval foodplants of this species, but it probably feeds on penstemons (Penstemon spp.) in the Scrophulariaceae based upon the habitat.

This species has a late flight at the end of the collecting season. It appears in September and flies until mid-October. It is nocturnal and comes to lights.