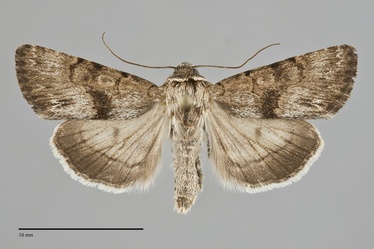 Sympistis occata is a small (FW length 10 - 12 mm), gray-brown moth that flies in dry steppe habitats during the summer. It has a black lower median area but is pale clay-gray elsewhere on the posterior forewing. The ground color of the forewing is even gray-brown, slightly mottled with darker gray in the terminal area and widely suffused with light blue-gray outside of the median area, strongest near the trailing margin. The veins on the distal wing are dark. The dark gray median line is thin anteriorly except for a spot on the costa, thick and diffuse on the lower half of the wing, where it nearly fills the median area below the cell. The basal, antemedial, and postmedial lines are brown and double-filled with light shade of the ground color, the components of the antemedial and postmedial lines abutting the median area darkest. The postmedial line is broadly excurved and slightly oblique from anteromedial to posterolateral, drawn slightly toward the base at each of the veins. The postmedial line is thickened at the costa, then excurved near the reniform spot and touching the lower spot, then curved below the spot to meet the trailing margin at a right angle. The subterminal line is an irregular series of pale tan lines and chevrons between the veins. The line is preceded by a series of long narrow arrowhead-shaped black marks between the veins, strongest posterior to vein R5. The terminal line is a series of dark gray lines, spots, or triangles between the veins. The fringe is checkered gray-brown and gray. The orbicular and reniform spots are outlined in thin brown to dark gray and are filled with light brown peripherally and the ground color centrally. The orbicular spot is oval. The reniform spot is wide and kidney-shaped. The claviform spot is absent or thin, brown or gray, and filled with the ground color. The hindwing is light gray-brown with dark gray veins, a thin discal spot, complete even postmedial line, and marginal band. The hindwing fringe is white with a yellow and gray or light gray base. The head is dark brown, except for light yellow-tan in the lower face. The thorax is gray-brown with dark barring across the collar. The male antenna is filiform.

This species can be recognized by its small size, black posterior median area, and light gray along the rest of the posterior margin. It is unlikely to be confused with other Sympistis species in our region.

This species is endemic to dry, open grasslands at low elevations east of the Cascades within the Columbia Basin.  It is locally common at times.

This species is found in the dry interior portions of the Northwest as far north as the southern Okanagan region of British Columbia.  Curiously, most of the records are from near major rivers in the Northwest.

This species is widely distributed on the western Great Plains, in the southern Rocky Mountain states, and in the Southwest to southern California. It occurs from Texas to southern Alberta on the Plains.

This species has a long flight period from the spring to fall in our region. Limited records suggest the presence spring and fall broods in our area. It is nocturnal and comes to lights.