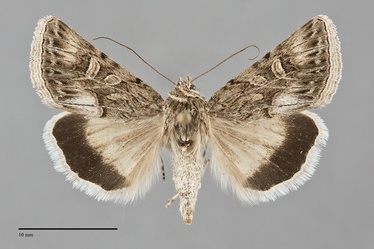 Sympistis incubus is a streaky brown, medium-sized moth (FW length 13–17 mm) that flies in sandy steppe habitats east of the Cascade Range during September. It has an asymmetrically oval orbicular spot, a black-banded light tan hindwing, and white fringes on both wings. The forewing is moderately dark gray-brown, slightly darker in the median area and on the distal wing. The medial subterminal area is light brown opposite the cell and light brown or pale blue-gray posterior to vein CuA2. The veins are pale gray-brown to the mid-subterminal area and dark further distally, the pale spots in the subterminal area extending distally along each of the veins that crosses them. The basal, antemedial, and postmedial lines are dark gray or brown, double filled with light shade of the ground color, thickened to spots on the costa. The basal line is located near the wing base. The antemedial line is jagged. The postmedial line is moderately scalloped, excurved around the end of the cell, touches the posterior reniform spot, and curves to join the trailing margin at a slight angle toward the wing base. The median line is gray, closely parallel to the posterior postmedial line and bent toward the base in the cell. The subterminal line is a series of light gray-brown spots between the veins, preceded medially by a series of black sharply defined long arrowhead-shaped marks and followed laterally by less well-defined dark gray spots. The terminal line is black. The fringe is broad, tan at the base and light gray distally, containing a number of very faint brown and gray lines but appearing light gray. The spots have black outer and light gray-brown inner outlines and are filled with slightly reddish brown containing central yellow lines. The orbicular spot is asymmetrically ovoid, tilted toward the base anteriorly. The reniform spot is kidney- to half-moon shaped. The claviform spot is long and apically pointed with the tip touching the postmedial line. The hindwing ground color is light tan with slight tan basal suffusion. It has a sharply-demarcated black marginal band, traces of a thin postmedial line, and a white fringe with a light yellow base and thin tan median line. The head and thorax are sandy brown with faint transverse barring on the collar. The male antenna is filiform.

This species is similar to several other fall-flying Sympistis species with streaky forewings and pale banded hindwings. It is nearly identical to Sympistis seth, with which it is said to occur with in southeastern Oregon (Troubridge 2008). This species is slightly lighter on both wings, with cream rather than pale tan hindwings, and usually lacks a thin tan median line in the hindwing fringe. We suspect that these names refer to slight geographic forms of the same species. Other similar species that resemble S. incubus are Sympistis simplex which has a symmetrical elongate orbicular post and Sympistis sesmu, which has a brown base in the fringes of both wings.

This species is widely distributed on dry sagebrush steppe at low elevations east of the Cascades.  It is usually rare and sporadic but can be locally common.

Sympistis incubus is found in the Columbia Basin as far north as the Okanogan River Valley near the border with British Columbia. It also occurs in eastern Oregon and southern Idaho, although it appears to intergrade to Sympistis seth in this region.  Isolated records from the Rocky Mountain Trench of southeastern British Columbia are probably best assigned to this species.

This species is not known outside of the Pacific Northwest.

The flight period of S. incubus is fall, with peak flight in late September. It is nocturnal and comes readily to light.