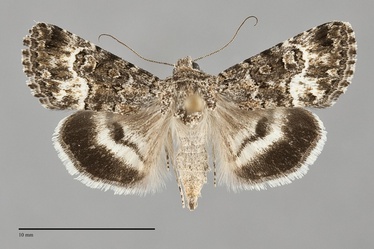 Sympistis apep is a small (FW length 10 - 11 mm), mottled gray moth that flies in steppe habitat in the Columbia Basin during the fall. It has a sinuous, white, outer postmedial line followed by a patchy white subterminal area on the forewing, and a banded black and white hindwing. The forewing is dark brownish gray, slightly lighter basal to the antemedial line and darker gray on the distal wing. A small slightly yellow-brown area abuts the postmedial line in the median area in the fold in most specimens. A black spot is present on the costa medial to the subterminal line. The subterminal area is blotchy white and gray, most extensively abutting the lower postmedial line. The short basal line is gray. The antemedial line is black adjacent to the median area and light brown medially. It is moderately irregular and oriented slightly oblique to the wing. The gray median line is faint.  The postmedial line is black medially and white distally, the white portion is widest on the posterior wing where it blends with the adjacent pale subterminal area. The line is excurved around the reniform spot and straight to the trailing margin, the posterior segment meets the margin at a right angle or is directed slightly toward the anal angle. The pale subterminal line is thin and irregular. It is preceded by a dark gray shade that blends with the uneven pale scales in the subterminal area. Only one or two black wedges are present medial to the line. The terminal line is a series of rectangular dark gray spots or lunules. The fringe is checkered dark brown and dark gray. The orbicular and reniform spots are rimmed black and pale, the inner pale line is widest in the reniform spot. The orbicular spot is round to oval, filled centrally with the ground color. The reniform spot is kidney shape, incomplete toward trailing margin. Its lower third is filled with the ground color, blending with the adjacent wing, while the anterior portion is filled centrally with lighter yellow-brown. The claviform spot is small, black, and filled with the ground color. The hindwing ground color is pale brownish off-white with gray basal suffusion. The black discal spot and medial line are fused. A wide black marginal band is present. The fringe is white with a dark gray base. The head and thorax are dark brown-gray. The male antenna is filiform.

This species resembles a pale gray form of Sympistis tenuifascia, a species that flies earlier in the year at mid- to high elevations in the mountains of the eastern Northwest region. These two species are unlikely to be collected together. The ground color or S. tenuifascia is brown, not gray as in S. apep. Sympistis apep flies with Sympistis parvacana in the Columbia Basin. This species is similar in size but differs in the lack of a median band on the dorsal hindwing.

This species flies in juniper woodlands and sagebrush steppe along the eastern edge of the Cascades at low elevations. It is associated with basalt outcrops where it occurs in the Columbia Basin. Sympistis apep is rarely collected.

The range of S. apep is the western part of the Columbia Basin.

This species is not known to us from outside of the Northwest.

No information is presently available regarding larval foodplants of this species. It probably feeds on one or more species of beartongue (Penstemon spp.) in the Scrophulariaceae based on the known foodplants and associations of several related species.

Adults of S. apep fly during the fall, usually in September. They are nocturnal and come to lights.