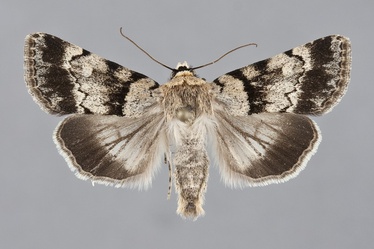 Sympistis extremis is a light yellowish-gray, medium-sized moth (FW length 15 - 17 mm) that flies east of the Cascade crest during the summer. It has thick black transverse lines, a diffuse thick median band that is fused to the antemedial line, a black head, and a pale hindwing with a broad gray marginal band. The forewing ground color is powdery due to scattered black scales, on occasion so heavily that entire wing is dark. Dark suffusion is often present in the cell between the spots and distal to the reniform spot. Most of the subterminal area is even dark gray, with a poorly defined medial edge near the postmedial line. The terminal area is variable, usually blotchy areas of dark ground color but occasionally as dark as the subterminal areas with patches of lighter scales. The fringe is dark gray or weakly checkered gray and tan. The basal line is short and black. The antemedial line is very thick, black, sharply defined medially, and broadly fused to the median line except near the costa, nearly straight except for a bend toward the wing base near the costa. The median line is thick, black, irregular, and diffuse, broadly fused to the antemedial line across the medial median. The postmedial line is black, slightly irregular with a zigzag course on the posterior wing, bent toward the wing base at the anterior cell and slightly oblique toward the base below the cell. The position of the subterminal line is an irregular interface between the dark gray subterminal area and the blotchy terminal area. The terminal line is a series of dark gray spots. The reniform spot is evident as pale filling; the positions of the orbicular and claviform spots are sometimes evident as pale areas in the black median area. The hindwing is light brownish gray with a dark gray marginal band, veins, and thin terminal line. The discal spot is absent. The hindwing fringe is tricolored with a yellow base, thin gray median line, and white edge. The head is light yellow-gray with a black transverse bar across the top. The collar is yellow-gray with a light edge, and the rest of the thorax is slightly darker and more gray. The male antenna is filiform.

This species can usually be recognized by the irregular black markings on the median forewing due to the fused median and antemedial lines. It is most similar to Sympistis sokar; both S. sokar and S. extremis were for a long time considered be a form of Sympistis chorda. The antemedial line of S. sokar is thick, black, and separate from the much less prominent median line. The dark on its distal wing is lighter gray than that of S. extremis without much pale color in the terminal area, and the ground color is slightly reddish and less powdery.

This species is primarily found at high elevations in the Cascades on open ridgetops with rock outcrops. It may be locally common in this habitat.

This species is also known from northern California and Colorado.

No information is presently available regarding larval foodplants of this species, but prostrate rock penstemons such as Penstemon fruticosus (Scrophulariaceae) are suspected based upon the habitat.

This species flies during the late summer and fall, slightly earlier in the season than S. chorda. It has been collected from mid-July to early September in our area. It is nocturnal and comes readily to lights.