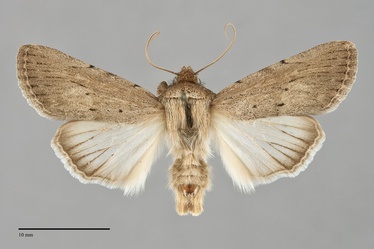 Sympistis fortis is one of the plainer Sympistis species in the Northwest. It is a medium-sized moth (FW length 17 mm) that flies in western Oregon during the fall and has a glossy tan forewing marked with a few black dots and lines near the outer margin. The forewing is slightly darker in the terminal area and fringe than elsewhere. The lines are reduced to black spots on the costa at the basal, antemedial, and median lines, with an additional spots where the antemedial line crosses 1A+2A near the trailing margin. There are several black spots on the veins along the course of the postmedial line, and short black segments of this line are evident where it bends around the end of the cell. A series of five short black lines between veins are present in the region of the distal subterminal area opposite the cell, and the terminal line is composed of long black triangles in the same part of the wing. The fringe is gray-tan with a pale tan line at the base and a darker gray median line. The spots and subterminal line are absent.  The hindwing is pale whitish gray with a slight pearly sheen, with gray-brown veins on the outer third and slight gray-brown shade near the outer margin. The hindwing fringe is yellow at the base, has a tan median line, and is white distally. The head and thorax area smooth gray-tan, darkest on the head and base of the collar. The male antenna is filiform.

This species can be recognized by its smooth tan forewing marked only with black dots and distal lines between veins. No other moth in our area has a similar combination of color and markings.

This species is mostly limited to low elevation riparian forests of mixed hardwoods west of the Cascades.  It is very rare in collections, but adults may not be attracted to lights.  It should be common based upon the abundance of the larval foodplant.

This species is narrowly restricted to western Oregon in the Northwest.

Sympistis fortis occurs throughout most of western California to Baja California.The range extends east to Colorado through southern Nevada and Arizona.

This species is a foodplant specialist feeding on Oregon ash (Fraxinus latifolia) in the Oleaceae. It is also reported to feed on Keckiella antirrhinoides (Scrophulariacaceae).

The flight period for this species in Oregon and California is late summer and fall, usually late August and September. It also flies during the winter in Arizona according to Powell and Opler (2009).