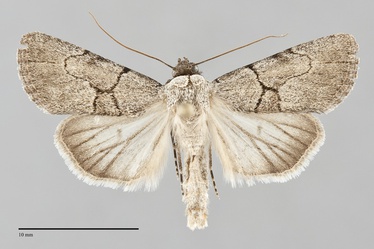 Sympistis pallidior is one of six similar gray species in the Sympistis atricollaris species-group with a black H pattern of lines on the mid-wing. It is small (FW length 13–14 mm) with a smooth to slightly powdery medium-dark gray forewing that is slightly darker toward the distal margin. It lacks dark veins and the terminal area is the same color as the subterminal area without a discernable transition. A few very thin black lines are present between the veins at the outer margin, with the longest and thickest between veins M1 and M2 extending to or barely crossing the postmedial line. The lines are black. A line across the median area connects the antemedial and postmedial lines in the fold. The basal line is absent or a dot on the costa. The antemedial line is moderately thick, straight, with an angle with apex toward the lateral margin at the connecting line and a bend toward the base below the costa. The postmedial line is smoothly sinuous, smoothly convex around the cell from an origin on the outer third of the costa meeting the connecting line at mid-wing, bent at the juncture to meet the trailing margin at a right angel. A gray median line is present, often only visible near the costa. The subterminal line and the spots are absent. The hindwing is pale whitish gray with increasing gray toward the outer margin, slightly darker in females, with dark veins, a small discal spot, and thin terminal line. The fringe is tricolored yellow, gray, and white on most of the wing and white at the anal angle. The head is brown-black. The collar base is pure black, and the remainder is contrasting whitish gray with a slightly darker gray apical line. The rest of the thorax matches the gray of the forewing. The male antenna is filiform.

This species has been collected in prairie parkland along the Peace River in northeastern British Columbia.  It occurs in mid-elevation open forest in southeastern Idaho.

This species has been found in two widely divergent areas in the Northwest.  It occurs in the Peace River region of northeastern British Columbia and in southeastern Idaho.

Sympistis pallidior is found predominantly in the Great Plains. Specimens have been examined from Alberta and Saskatchewan.

No information is presently available regarding larval foodplants of this species, but it may feed on snowberry (Symphoricarpos spp.) in the Caprifoliaceae based upon closely related species.

This species flies during the summer. Specimens have been collected in mid-July in British Columbia, but it likely emerges as early as June depending on the season.