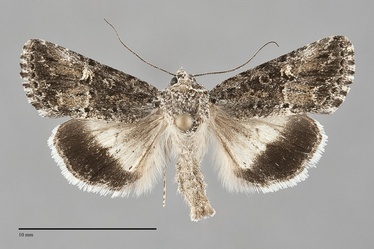 Sympistis parvacana is a small (FW length 11 - 13 mm), gray moth that flies on dunes along the Columbia River in the Columbia Basin during the fall. It has a slightly paler subterminal area, white in the anterior reniform spot, and an off-white hindwing with a wide black marginal band. The forewing ground color is medium-dark gray, darkest near the outer margin and slightly paler and slightly tan colored in the subterminal area. The basal line is absent. The antemedial line is very faint gray, double, mostly evident as spots on the costa and vein A1+A2 near the trailing margin. The median line is faint gray on the costa. The postmedial line is faint gray and double, filled with light gray, with darker spots on the costa, the cubital vein, and vein A1+A2. It is narrowly excurved around the cell and nearly straight to the trailing margin below the reniform spot. The subterminal line is pale gray, irregular, and patchy. It is preceded by a slight gray shade, sometimes forming two or three black wedges between veins. The terminal line is a series of short dark gray spots or lunules. The fringe is checkered light and dark gray. The orbicular spot is small, round, gray, filled with light gray and a dark gray ocellus. The reniform spot is dark gray, kidney-shaped with slightly larger posterior half, open posteriorly, filled with pale whitish gray peripherally and dark gray in the posterior third. The claviform spot is gray, filled with slightly lighter gray than the ground. The hindwing is grayish off-white with light gray basal suffusion, light tan in females, with a faint gray discal spot in a few specimens and a wide black marginal band. The hindwing fringe is tricolored with a yellow and gray base and wider white edge. The head and thorax are mottled gray with faint transverse banding on the collar. The male antenna is filiform.

This species is most similar to Sympistis satanella which is restricted to southeastern Oregon in our region. Compared to S. parvacana it has a paler subterminal area with a white outer component of the postmedial line on the posterior half of the wing, the entire wing is more mottled, and black wedges in the subterminal line are prominent across most of the wing. In Washington S. parvacana is most likely to be confused with Sympisits apep, with which it flies. S. apep is also small and gray, but it has a dark median band on the dorsal hindwing that S. parvacana lacks.

This species appears to be locally endemic to dry sand dunes at low elevations near the Columbia River. A few specimens have been collected in sage steppe habitats away from the dunes. This species is not associated with rocky habitats like many other Sympistis species.

This species is found near the Columbia River in the Columbia Basin. It has been collected most frequently in south-central Washington but also occurs in northern Oregon.

This species is a Pacific Northwest endemic and has not been found elsewhere.

No information is presently available regarding larval foodplants of this species, but penstemons (Penstemon spp.) in the Scrophulariaceae are suspected based upon closely related species.

This species flies during the fall, mostly during September. It is nocturnal and comes to lights.