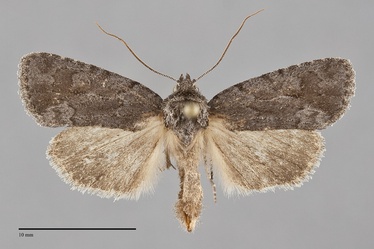 Sympistis dentata is a small to medium-sized, powdery-gray moth (FW length 13 - 16 mm) that flies in forests in British Columbia and a few localities further south during late summer and fall. Its markings are mostly limited to dark lines and a pale-filled wide reniform spot. The forewing shape is relatively short and blunt-tipped. The color is nearly even powdery medium-dark gray, slightly lighter near the costa and on the distal wing, especially near the anal angle. The basal, antemedial, and postmedial lines are dark gray with faint lighter gray along the side of the antemedial and postmedial lines outside of the median area. The basal line is a spot on the costa. The antemedial line is oblique from anteromedial to posterolateral on the costa, then sinuous across the wing to the trailing margin. The median line is a short oblique mark on the costa. The postmedial line is dentate with slightly darker tips of the teeth, widely excurved around the distal cell and then oblique toward the wing base to the trailing margin. The suberminal line is absent. The terminal line is a dark gray line. The fringe is gray, weakly checkered. The reniform spot is broad, gray in outline and filled with slightly lighter gray than the ground, except for the ground color at the posterior end. The orbicular and claviform spots are absent. The hindwing is even powdery brown-gray, with a diffuse slightly scalloped postmedial line followed by a slightly paler band. A thin gray terminal line is present at the base of the fringe which is white with a gray base. The head and thorax are gray, with lighter gray edge on the collar and central tegulae. The male antenna is filiform.

This species is fairly non-descript in color and pattern but can usually be recognized from its broad blunt wing-shape and powdery gray color. It is most similar to Sympistis anweileri, with which it flies in British Columbia. Compared to this species, S. dentata is more uniform gray in color without dark and light mottling, and lacks orbicular and claviform spots. These species differ in details of the vesica of the male genitalia. That of S. anweileri has a spine-like cornutus on the mid-vesica that S. dentata lacks (Troubridge 2008).

This species is geographically variable. Western populations are more powdery gray compared to those from the East Coast. The subspecies S. d. pyralis is available for those wishing to use subspecies for these forms.

This species is widely distributed across Canada in moist forest habitats, extending to the northern Rocky Mountain region.  It appears to be rare and sporadic in the Pacific Northwest.

Sympistis dentata occurs in southern British Columbia east of the Okanagan region. It has also been found in the northeastern portions of Oregon and Washington.

This species is found across boreal North America to the Atlantic. The range extends north to northern Alberta, but most records are from a narrow north-south distribution near the Canada-United States border. The limits of the range are the Gaspé Peninsula to New Jersey along the East Coast.

This species has been recorded from huckleberries (Vaccinium spp.) in the Ericaceae (Forbes 1954).

The adults are on the wing in July and August in most parts of its range. A few Pacific Northwest specimens have also been taken in early September.  This species is nocturnal and comes to lights.