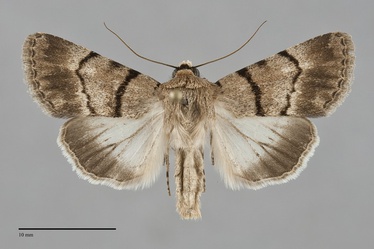 Sympistis sokar is a light gray-tan, medium-sized moth (FW length 15 - 16 mm) that flies east of the Cascade Mountain crest during the late summer and fall. It has thick black transverse lines on the forewing, a black head, and a white hindwing with a gray marginal band. The forewing ground color is light grayish tan with a slight reddish tint. The distal median area and adjacent subterminal area are lighter, often with a pale streak extending distally from the reniform spot. The with distal to the mid-subterminal area is nearly dark gray, sometimes with scales of the ground color near the anal angle. The fringe is slightly lighter gray. The basal line is a dark spot on the costa. The antemedial line is thick, black, slightly excurved near the costa, and perpendicular to the trailing margin on the posterior forewing. The postmedial line is black, thickest on the wing margins, slightly irregular, directed toward the anal angle from the costa, curved slightly less than 90° at the end of the cell to course slightly toward the wing base from the lower cell to near the trailing margin, then bent sharply toward the base just above the margin. The dark gray median line is variable in strength, usually a diffuse spot on the costa and faint elsewhere across the wing. The terminal line is dark and thin. The reniform spot is evident as pale tan filling. The orbicular spot is usually absent, occasionally also visible as a pale spot. The claviform spot and subterminal lines are absent. The hindwing is pearly white, slightly gray in females, with a dark gray marginal band, veins, and thin terminal line. The discal spot is absent. The hindwing fringe is tricolored with a yellow base, thin gray median line, and white edge. The head is tan with solid black transverse bar at the bases of the antennae. The collar is tan, and the rest of the thorax is gray-brown. The male antenna is filiform.

Sympistis extremis is a similar moth which was considered to be a form of S. chorda - the name under which S. sokar was known prior to 2008 - for many years. These species fly together, commonly on middle-elevation ridges on the east slope of the Cascades. Sympistis extremis is yellower than that of S. sokar, has a forewing pattern that is dominated by black fused median and antemedial lines, and has darker gray on the distal forewing. Sympistis youngi has a gray forewing with a pattern of smooth black lines like that of S. sokar, but lacks black on the head. Its postmedial line is smoothly excurved lateral to the reniform spot, the spots are outlined in black, and the median area is orange-gray - features that are lacking in S. sokar.

Two species names, Sympistis sokar and Sympistis dischorda, were proposed by Troubridge (2008) for Pacific Northwest populations to distinguish them from the superficially similar S. chorda that occurs in Colorado and Utah. He cites differences in the orientation of the female appendix bursae between S. chorda and both of the others, and difference in the amount of dark shading on the terminal forewing and habitat preferences between S. sokar and S. dischorda. We have not found evidence for two species in the Northwest. We use the species name sokar for the Northwest populations as we have not examined material from Colorado or Utah to confirm the structural differences between the Rocky Mountain and Pacific Northwest populations, but consider Sympistis dischorda to be a synonym of Sympistis sokar.

This species is widely distributed throughout much of western North America in dry, rocky canyonlands, juniper woodlands, and brushlands at middle elevations, but is usually sporadic and uncommon. It is associated with basalt cliffs and canyons.

Sympistis sokar is found in eastern Washington, eastern Oregon, and southern Idaho in the Northwest. It is most common on ridges in the mountains but also occurs in canyons at low elevations.

This species is found in eastern and southern California south of the Northwest. It also occurs through Nevada, but is replaced by S. chorda in Utah and Colorado (Troubridge 2008). A record for southwestern Alberta suggests that the range may include much of the Rocky Mountains in the United States.

No information is presently available regarding larval foodplants of this species, but beardtongues (Penstemon spp.) in the Scrophulariaceae are suspected based upon the habitat and preferences of many related species.

The flight period of this species is late summer and fall. They first appear in late July and fly through September in our region. This species is nocturnal and comes to lights.