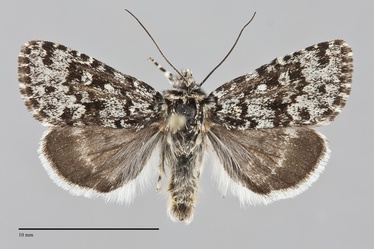 Sympistis lapponica is a small moth (FW length 11–12 mm) that has been found just north of British Columbia during the summer. It has a blue-gray and black forewing that is strongly mottled with a nearly checkerboard pattern, and a dark gray hindwing with a diffuse pale median line and a white fringe. The median area is darker gray than the rest of the wing. Black lines and spots are present along the trailing margin basal to the antemedial line, in the fold in the distal half of the median area, in the cell outside the spots, and preceding the subterminal line near the apex, on the mid-wing, and near the anal angle. The lines are black and the basal line is short. The antemedial line is irregular, zigzag, and often strongly toothed toward the orbicular spot. The median line is diffuse, usually evident as a spot on the costa and a line near the antemedial line on the posterior wing and broken in the cell. The postmedial line is dentate, broadly curved around the end of the cell and then oblique toward the base to the trailing margin. The position of the subterminal line is indicated by the black spots on the forewing. The terminal line is a series of short black bars between the veins. The fringe is strongly checkered black and white. The small orbicular and reniform spots are black filled with white, usually with a central gray spot in the reniform. The claviform spot is absent. The hindwing is blackish gray with a diffuse but narrow tan median line. The hindwing fringe is white with a gray base. The head and thorax are glaucous gray, partially covered in long hair-like scales. The eye is reduced in size. The male antenna is filiform.

Sympistis lapponica can be identified by the combination of checkered blue-gray and black forewing and dark hindwing with a pale median band and white fringe. The only other species with a similar forewing in the subarctic is Sympistis heliophila, but it has a white and black hindwing entirely unlike that of S. lapponica.

This species is widely distributed on arctic shrub tundra in boreal regions of Eurasia and North America, extending so southern Yukon Territory in alpine tundra.

This species has been found on Montana Mountain in southern Yukon Territory.  This locality is just north of British Columbia.

This species has a Holarctic distribution, occurring across northern Eurasia to Scandinavia. In North America it is found in the High Arctic and subarctic regions from Yukon Territory to Labrador, Baffin Island, and Greenland.

This species is a foodplant specialist feeding on dwarf huckleberries (Vaccinium spp.) in the Ericaceae. It has also been reported on dwarf birch (Betula nana) in the Betulaceae.

Sympistis lapponica is strictly diurnal and visits flowers for nectar. It flies during the summer, usually in June and July but occasionally later depending on the snowmelt and season.