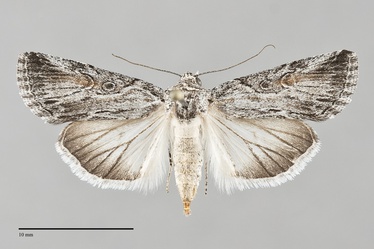 Sympistis orbicularis is a small moth (FW length 13 mm) flies near cliffs in eastern Oregon during the fall. It has a streaky, light gray forewing with a dark apex and rust-red in and near the reniform spot that. The forewing ground color is dusty light gray, darker blackish gray near the apex, and slightly darker gray near the lateral trailing margin. The veins are dark gray on the posterior and distal wing. A series of black lines are present between the veins in the terminal area, strongest between veins CuA1 and CuA2. A rusty suffusion is present in the cell and distal to the reniform spot. The lines are mostly evident as dark gray spots on the costa; however, the antemedial line is strongly oblique from medial to lateral, evident from the costa to the posterior cell below the orbicular spot. The pale gray subterminal line is variable, strongly zigzag when visible. The terminal line is dark gray medially and light yellow-gray laterally. The fringe is weakly checkered gray. The orbicular spot is gray, filled with the ground color peripherally, and has a dark gray central ocellus. The medial reniform spot is dark gray, with the rest of the outline pale gray to light rust. The central spot is rust-colored. The hindwing is shiny pale whitish gray, darker gray near the outer margin, with dark veins. The hindwing fringe is white, sometimes with a cream and light gray base. The head and thorax are light gray, with pale and dark banding on the collar and a dark gray weak tuft on the posterior thorax. The male antenna is filiform.

This species is most similar to Sympistis meadiana in size, shape, and color. The forewing lines of S. meadiana extend across the wing, unlike those of S. orbicularis. The gray, streaky forewing is also similar to those of Trichocerapoda oblita and Trichocerapoda strigata, both of which occur with S. orbicularis and fly in the fall. The eyes of these species are covered with fine hairs, and the forewing spots are completely outlined in dark gray and have white and lack red filling, both of which are traits that S. orbicularis lacks.

This species is usually very rare and sporadic on dry sagebrush steppe near basalt cliffs at low elevations in the Great Basin region, but may be locally common.

Sympistis orbicularis is only known from the Great Basin region of central and eastern Oregon.

The range of S. orbicularis extends south through Utah, Nevada, and California.

This species has been reared by Mike Raschko from larvae collected in Deschutes County, Oregon on desert goat's beard (Holodiscus microphyllus) (Rosaceae).

The flight season of this species is late August and September. It is nocturnal and comes to light.