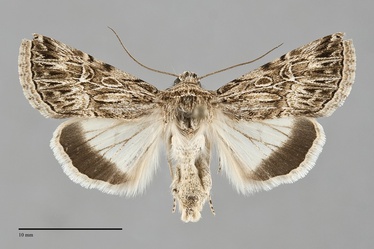 Sympistis simplex is a small to medium-sized moth (FW length 13 - 15 mm) that flies in sage steppe during the fall. It has a gray-brown forewing with a busy pattern of pale lines and spots with an oval orbicular spot and a black-banded white hindwing. The cubital and anal vein are pale to the subterminal area. The forewing is darkest gray in the anterior and lateral subterminal area and in the terminal area, and palest brownish white in the posteromedial subterminal area extending lateral on each side of the veins to the subterminal line. The antemedial line is black laterally and pale brown medially, strongest on the anterior wing, very irregular. The median line is pale and gray. The postmedial line is gray to black adjacent to the median area and pale brown laterally, nearly as pale as the adjacent posterior subterminal area, scalloped, narrowly bent sharply toward the base below the costa and nearly straight in an oblique course across the wing to the trailing margin, touching the posterior reniform spot. The subterminal line is pale brown, irregular and broken by the veins and toothed extensions of the subterminal area to the outer margin. It is preceded by dark wedges between the veins across the wing which accentuate the toothed appearance of the subterminal line. The terminal line is dark, continuous or broken by the veins. The fringe is gray basally and weakly scalloped pale gray to light brown and gray. The forewing spots are outlined in black outside and pale brown inner lines and are filled with the ground color or paler brown. The orbicular spot is a long oval. The reniform spot is semilunar, and the claviform spot is long, reaching or nearly reaching the postmedial line. The hindwing is yellow-gray off-white with variable gray basal suffusion and gray veins and a broad even dark gray marginal band. The hindwing fringe is white with a light tan base. The head and most of the thorax are gray-brown. The collar is brown with a black basal stripe and brown barring elsewhere. The male antenna is filiform.

This species is found in juniper woodlands and on open sagebrush steppe at low to middle elevations east of the Cascades. It is uncommon to rare.

Sympistis simplex is found in the dry interior steppes of the Northwest as far north as the Okanogan River Valley in north-central Washington. It is most common in the western part of the Columbia Basin but has been found in southeastern Idaho.

This species is found in California and the Southwest outside of our region.

No information is presently available regarding larval foodplants of this species, but it probably feeds on penstemons (Penstemon spp.) in the Scrophulariaceae based upon the habitat.

Adults of this species fly during the fall, most commonly from mid-September. It is a nocturnal species that come to lights.