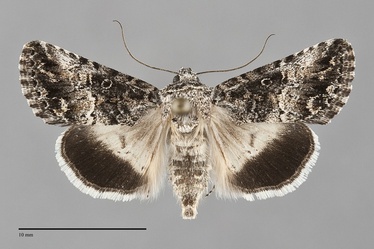 Sympistis satanella is a small (FW length 11–13 mm), mottled gray species that flies over sandy soils in southeastern Oregon. It is pale across the median subterminal area and has an off-white hindwing with a wide black marginal band. The forewing ground color is mottled gray, slightly darker in most of the median area and on the distal wing and paler and slightly brown-tinted on the medial subterminal area and adjacent posterolateral median area. The basal and antemedial lines are gray, double, filled with lighter gray to brownish gray. The antemedial line is slightly irregular and oriented slightly oblique to the wing. The median line is faint, dark gray. The postmedial line is black followed by light gray on the anterior wing and white below the reniform spot. It is narrowly excurved around the cell and nearly straight to the trailing margin below the reniform spot. The subterminal line is pale, irregular, and patchy. It is preceded by long black lines and wedges between the veins except near the costa and trailing margins. The terminal line is a series of short black lines or lunules. The fringe is checkered light and dark gray. The orbicular spot is small, oval, black in outline, filled with light gray to brown gray and a black central ocellus. The reniform spot is black, incomplete posteriorly and thickest medially, filled with pale whitish gray peripherally and a gray lunule centrally. The claviform spot is small and black, filled with the adjacent ground color. The hindwing is yellow-gray off-white with light gray basal suffusion, black dots on the veins at the postmedial line, and a wide black marginal band. It usually lacks a discal spot, but a narrow gray spot is present in a few specimens (as depicted). The hindwing fringe is tricolored, yellow, gray, and white. The head and thorax are mottled gray with faint transverse banding on the collar. The male antenna is filiform.

This species can be identified by its southeastern Oregon locality (although it might occur in southern Idaho), relatively small size, off-white hindwing with a broad black marginal band, and gray forewing with a pale band across the subterminal and median areas. It is most similar to Sympistis parvacana, which occurs in the Columbia Basin. The pale subterminal area and white component of the postmedial line in S. satanella are more prominent than in S. parvacana. In addition the black lines across the subterminal area are much more developed in S. satanella. When viewed side-by-side, the pattern of S. parvacana is much smoother across the entire forewing. Sympisits satanella is also similar in size and color to Sympistis apep, another steppe species that flies in the fall. It has a black median line on the dorsal hindwing that S. satanella lacks.

This species is endemic to very dry sagebrush steppe on sand soils. It is not closely associated with rock outcrops.  It is usually rare and sporadic, but may be locally common.

Sympistis satanella is found in southeastern Oregon in our region. It is known from three localities, one in Lake County, two in northern Malheur County, and one near Denio, Nevada, in southern Harney County.

This species extends southward into the Great Basin region of Nevada, and has also been found in western Wyoming near the eastern end of the Snake River Plain.

No information is presently available regarding larval foodplants of this species. The suspected foodplant is beardtongue (Penstemon spp.) in the Scrophulariaceae based on the preferences of related species.

The flight period of S. satanella is the fall. All specimens encountered from the Northwest were collected in September. This species is nocturnal and comes to lights.