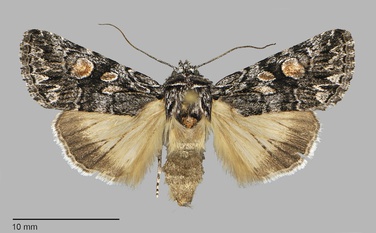 Sympistis shirleyae is a distinctive mottled charcoal gray, small stout moth (FW length 14 mm) that flies in the Siskiyou Mountains of southwestern Oregon during late summer. It has red-filled forewing spots and a red tuft on the posterior thorax. The forewing is dark gray, mottled and grizzled due to mixture of light and dark scales. The distal wing is slightly darker gray, as is the median area due to a thick median line. A thin basal dash is present. The lines are dark gray, the antemedial and postmedial lines bordered with lighter gray outside of the median area. The antemedial line is irregular, drawn sharply toward the base on the cubital vein. The postmedial line is weakly scalloped, smoothly convex around the end of the cell, touching the lower reniform spot, and slightly oblique toward the base below the spot. The pale gray subterminal line is jagged with several teeth extending to the outer margin, preceded and followed by dark gray. The terminal line is thin, black. The fringe striped light and dark gray at base, lateral edge weakly checkered gray and black. Spots outlined in black and light gray. The orbicular spot is ovoid, filled with rust red. The reniform spot is wide, kidney-shaped, filled with rust and gray scales, darkest red at lower half. The claviform spot is filled with pale gray and a few rust scales. The hindwing is light yellowish gray-brown with a dark gray marginal band with indistinct inner margin, faint gray discal spot, and dark gray veins and terminal line. The hindwing fringe is tricolored, yellow, gray, and white. The head and thorax are grizzled gray, with a black bar on the head and white, gray, and brown bands on the collar. A tuft of rusty scales is present on the posterior thorax. The male antenna is filiform.

No information is presently available regarding habitats of this species in the Pacific Northwest. The habitat at the type locality in the northern Sierra Nevada is open transition zone conifer forest.

This species has only been found once at Grants Pass in southwestern Oregon. It is rarely collected and is only known from a total of three specimens.

The only other known site where this species has been found is the type locality in Plumas County, California in the northern Sierra Nevada.