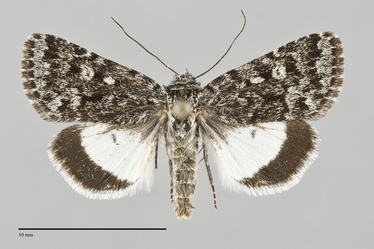 Sympistis heliophila is a very small to small (FW length 9–11 mm) day-flying moth that flies in northern British Columbia during the summer. It has mottled grizzled gray forewings with white orbicular and reniform spots and a pure white hindwing with a black marginal band. The forewing appears slightly bluish and hoary, due to light gray scales amongst the dark ground. The terminal area, medial subterminal area, and wing base are lighter than the median area. Black lines are located in the lower cell and connecting the claviform spot to the postmedial line. The lines are black, with gray components of the antemedial and postmedial lines outside of the median area. The antemedial line is zigzag, oblique from anteromedial to posterolateral. The postmedial line is moderately scalloped, bluntly excurved around the reniform spot and nearly straight perpendicular to the trailing margin posterior to the spot. The subterminal line is pale gray, uneven with the tips of several teeth reaching the outer margin in many specimens. Lying along the basal edge of this line is black shading or a series of black spots, often largest and darkest on the costa. The terminal line is a series of dark spots between veins. The fringe is weakly to moderately checkered light and dark gray. The orbicular and reniform spots are outlined in thin black and are filled with white peripherally. The orbicular spot is oval, usually entirely filled with white but sometimes with a small central black spot or line. The reniform spot is small and kidney-shaped, usually with central gray. The claviform spot is thin, reaching half-way to the postmedial line and connected to it by a black line. The hindwing ground color is pure white, with limited gray basal suffusion. The discal spot is a small gray dot, and the dark gray to black marginal band is sharply demarcated and even in width. The hindwing fringe is white with a gray base. The head and thorax are hoary dark gray, covered with long hair-like scales. The eyes are reduced in size. The male antenna is filiform.

This species resembles Sympistis zetterstedtii, a small alpine moth that has a similar white and black hindwing in our area. The forewing of S. zetterstedtii is much smoother with less conspicuous and crisply-defined markings. Its hindwing is heavily suffused with black at the base and inner margin and appears darker than that of S. heliophila, despite the fact that the ground color is white. Anarta nigrolunata, a common alpine moth in the tribe Hadenini of the subfamily Noctuinae, has a large black hindwing discal spot unlike the small spot of S. heliophila. Its eyes covered with fine hairs, like other members of its tribe. These hairs are absent in the subfamily Oncocnemidinae.

This species occupies dry heaths and open forests across the subarctic parts of Eurasia and North America. It is usually not found over rocky tundra.

This a subarctic species that reaches the southern limits of its range in northern British Columbia in the Northwest. It has been found as far south as Pink Mountain near the Alaska Highway north of Fort St. John.

This species has a Holarctic distribution and occurs around the world from Scandinavia to Labrador at high latitudes. It is found from Yukon Territory to Labrador in North America, south to northern Alberta and Manitoba. An isolated colony is located on Mt. Albert on the Gaspé Peninsula, Quebec.

This species is a foodplant specialist feeding on Empetrum in the Empetraceae and dwarf huckleberries (Vaccinium spp.) in the Ericaceae.

The adults fly during the day and take nectar at flowers. The fly in June and July.