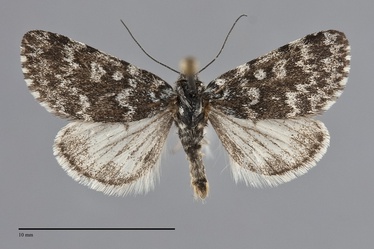 Xestia bryanti is a very small to small (FW length 9 - 11 mm), black-and-white, day-flying noctuid moth from alpine habitats in northern British Columbia in our region. It has predominantly white hindwings. The forewing ground color is dark gray with a hoary appearance due to scattered lighter scales. The pattern is comprised of the light gray zig-zag transverse lines, the terminal area, and the filling of the orbicular and reniform spots. The hindwing is white to light gray with dark gray dusting near the margin, thin dark discal spot, and veins and has a white fringe with light gray scales in the inner portion. The head and thorax are dark gray. The male antenna is filiform.

This species is most similar to several day-flying species of Sympistis with which it occurs. These species have similar forewings but their hindwings are either white with a well-defined black marginal band or dark gray with a white fringe unlike the pale hindwing of X. bryanti, which lacks a black band.

Xestia is a large and diverse genus found throughout temperate, alpine, and arctic portions of the Northern Hemisphere. The genus is subdivided into three subgenera, Xestia, Megasema, and Pachnobia, by Lafontaine (1998). The genus is defined by a thumb-like ventral extension called the pollex, which arises from the base of the clasper of the male valve. Over half of the North American species are found in the Northwest. Xestia bryanti belongs to the subgenus Pachnobia.

This species flies over dry arctic and alpine tundra.

This species is more widespread in Alaska, Yukon Territory, and Northwest Territory near the Mackenzie River Delta.

Adults of this species are diurnal. They nectar at flowers, including on saxifrage (Saxifraga sp.) and moss campion (Silene acaulis). Collection dates are late June through July across the entire range (Lafontaine 1998).