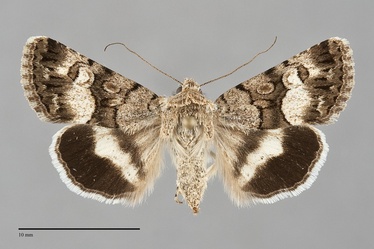 Sympistis albifasciata is a small (FW length 12 - 14 mm) moth with a brown forewing and black hindwing that are both marked with warm, brownish off-white on the median wing, giving the appearance of a continuous band across both wings in some specimens. It flies in a variety of dry habitats from mid-summer through the fall.  The forewing is sandy gray-brown on the base and with slightly darker gray-brown ground color distal to the antemedial line. The medial subterminal area is mostly the pale color described above, forming a large patch on the posterior half of the wing and a smaller one opposite the cell. The lateral subterminal area is darker gray with a series of long black wedges abutting the subterminal line on the anterior and mid-wing. The basal, antemedial, and postmedial lines are black and single. The antemedial line is smoothly convex, except for a short concave segment on the cubital vein. The postmedial line is narrowly excurved opposite at the reniform spot, then sharply drawn toward the base across the lower spot before turning in a smooth concave segment that borders the largest pale area to the trailing margin. A dark gray median line is present, varying from light to dark and blackish. The subterminal line is pale brown, irregular, and blotchy. The terminal line is a dark gray line or series of spots. The fringe is gray brown to gray with weak checkering in some specimens. The orbicular spot is long and oval, outlined in black and filled with the color of the adjacent median area with a darker ocellus. The reniform spot is broadly ovoid, outlined in black but open toward the trailing margin where it is crossed by the postmedian line. It is filled mostly with the same pale color as the subjacent subterminal area. The claviform spot is black, small, and filled with the adjacent ground color. The hindwing ground color is warm brownish off-white with gray-brown basal suffusion, a dark gray to black median line that obscures the discal spot, and a broad black marginal band that has an undulating medial margin. The hindwing fringe is tri-colored, yellow, gray, and white. The head and thorax are sandy tan, with faint barring on the collar. The male antenna is filiform.

The combination of a large white area in the lower subterminal area that is bordered by the concave postmedial line and the striped black and white hindwing are diagnostic of this species.

This species is widely distributed throughout much of western North America in dry brushlands, juniper woodlands, and canyonland habitats at low to middle elevations.  It is rather sporadic in distribution, but is one of the most reliably collected fall Sympistis species and can be locally common to abundant.

Sympistis albifasciata is found east of the Cascade crest in eastern Oregon and Washington. It has been collected most commonly in the western Columbia Basin and on the east slope of the adjacent Cascade Range. It is also known from southeastern Idaho and western Montana.

The range of this species includes the southern Rocky Mountain region, the Intermountain West, and northern and east-central California.

This species has been reared from larva collected on snowberry (Symphoricarpus sp.) in Deschutes County, Oregon by Mike Raschko.

The flight period of S. albifasciata is late summer and fall. It has been collected as early as late July, but it is most common during September. Adults are partially diurnal and visit flowers such as rabbitbrush (Chrysothamnus spp.) during the day. They more commonly fly at night and are attracted to lights.