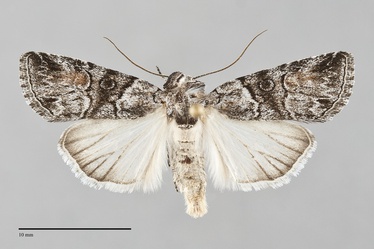 Sympistis meadiana is a small (FW length 12 - 14 mm) light gray species that flies near rock outcrops during summer and fall. Its forewings have a darker gray median area and brick-red scales in and near the reniform spot. The wing is relatively narrow with a squared off apex and smoothly convex lateral margin. The ground color is silvery gray, even on the wing base and mottled with darker gray near the subterminal line. A brick-red flush is present in the subterminal area in many specimens, strongest lateral to the reniform spot. The median area is sooty gray. Black marks are present at the apex on both sides of the subterminal line and in the terminal area near the anal angle between veins CuA1 and CuA2. The basal line is black and thin. The antemedial line is thicker black and smoothly excurved. The median line is dark gray, diffuse, passing through the orbicular spot. The postmedial line is dark gray to black medially and pale gray laterally, thinner than the antemedial line, evident on the costa and below the reniform spot where it is concave toward the base, but absent or very faint lateral to the spot. The subterminal line is light gray, dentate on the mid-wing and straighter near the costa and trailing margin. It is preceded and followed by patchy dark gray. The terminal line is black, thin. The fringe is gray, sometimes weakly checkered with dark gray. The orbicular spot is round to slightly oval, black, filled with the ground peripherally and a dark ocellus centrally. The reniform spot is black medially, with the outline of the other sides gray or absent, filled with the ground color peripherally and gray and brick red centrally. The claviform spot is gray to black, small. The hindwing is pearly whitish gray with gray and dark veins near the margin and a thin terminal line. The fringe is tricolored, yellow, gray, and white. The head and thorax are light gray with strong light and dark banding on the collar. A small tuft of dark gray scales are present on the posterior thorax. The male antenna is filiform.

Sympistis meadiana is most similar to Sympistis orbicularis, which flies in the desert of eastern Oregon. The color, size, and shape of these species is similar, but S. orbicularis lacks transverse lines below the costa and the median area is similar in color to the rest of the wing. Sympistis meadiana is also similar to Sympistis dunbari and Sympistis definita. Both of these species have a distinct postmedial line lateral to the reniform spot, absent of indistinct in S. meadiana, and their median areas are similar to the color of the rest of the wing, not contrasting dark as in S. meadiana.

This species is narrowly restricted to barren, rocky ridgetops and open lava fields at high elevations in the Cascades and Siskiyou Mountains.

The range of this species extends south through most of California south of the Pacific Northwest. It is also known from Colorado.

No information is presently available regarding larval foodplants of this species. The suspected foodplant is beardtongue (Penstemon spp.) in the Scrophulariaceae based on the known foodplant of many related species and habitat association.

This species has a fairly long flight season from mid-July to mid-September. It is most commonly collected during early September in the Northwest. It is nocturnal and comes to lights.