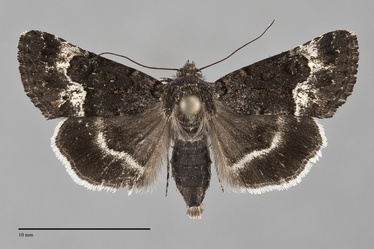 Sympistis aterrima is a small black moth (FW length 10–12 mm) that flies in high-elevation forests in west-central and southwestern Oregon in late summer. It has a forewing with mottled white in the postmedial line and adjacent subterminal area and a black hindwing with a white median line and white fringe. The ground color is brownish black, nearly even in the median area and slightly mottled with brown at the base and in the terminal area. The subterminal area is mottled white to light tan with a powdery appearance due to intermixed black scales. The basal and antemedial lines are black and double, and are filled with brown, and are poorly seen against the dark ground color. The postmedial line is double with a black medial and light gray outer components, filled with light tan to white. It is smoothly convex lateral around the reniform spot and slightly concave toward the base below the spot. The subterminal line is pale, very thin, and incomplete. The fringe is of the ground color. The orbicular, reniform, and claviform spots are inconspicuous, black filled with the ground color. The hindwing is velvety black with a off-white to tan median line. The hindwing fringe is white with a black base. The head and thorax are blackish gray. The male antenna is filiform.

This species is darker than Sympistis parvanigra, a more widespread small dark species with which it flies. These species can be most easily distinguished by the color of the medial hindwing, black in S. aterrima and gray in S. parvanigra.  Stylopoda groteana, an uncommonly collected black and white moth that has been found in southeastern Idaho, is also black and white with a similar forewing pattern. Its hindwing is all black, lacking the pale band of S. aterrima. Also, the ranges of these species are widely separate. Copanarta sexpunctata is a small nearly black moth with white markings on both wings that flies in the Siskiyou Mountains of southern Oregon within the range of S. aterrima. It differs in having target-like white markings in the reniform spot and the hindwing markings limited to two pure white spots.

This species appears to be rare and sporadic on rocky ridgetops at moderate to high elevations in the Cascades and Siskiyou Mountains.

Sympistis aterrima has only been found in the Cascade and Siskiyou Mountains of western Oregon in the Northwest. The most northerly records are from Lane County.

This species occurs in California south of the Oregon border. It is recorded from the northern part of the state and the Coast Range north of the Los Angeles Basin.

No information is presently available regarding larval foodplants of this species. It is likely that it feeds on beardtongue (Penstemon spp.) in the Scrophulariaceae based on larval preferences of related species.

Sympistis aterrima flies in late August to mid-September in the Northwest. It is nocturnal and comes to lights.