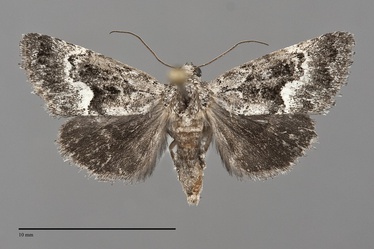 Stylopoda groteana is a very small to small, nearly black moth (FW length 9–11 mm) that flies in southeastern Idaho during late summer. It has sinuous white bands across the distal forewing and a black hindwing. The ground color is dark gray to brownish black, darkest in the posterior median area and in the distal subterminal area. The filling of the postmedial line and adjacent proximal subterminal area are white, darkening gradually toward the subterminal line. The basal and antemedial lines are dark gray, indistinct, slightly irregular, and are connected by the dark cubital vein across the antemedial area. The postmedial line is usually double with a black medial and faint to absent gray outer components, filled with white. It is bilobed toward the outer margin lateral to the reniform spot and concave toward the base below the spot. The subterminal line is pale, very thin, irregular, most evident as the transition from the black preceding shade to the slightly lighter terminal area. The fringe is dark gray, slightly checkered in some specimens. The orbicular and reniform spots are inconspicuous, black filled with a light shade of the ground color. The oval orbicular spot usually contains a dark ocellus. The claviform spot is a black smudge. The hindwing is velvety black, including the fringe. The head and thorax are powdery, similar to the forewing. The male antenna is filiform.

This species can be identified by its small size, a dark gray forewing with white bands across the subterminal areas, and a black hindwing. It is most similar to two species of Sympistis: S. aterrima and S. parvanigra. These moths have pale band-like areas on the dorsal hindwing that are lacking in S. groteana.  In addition, they are found further to the west in the Cascade and Siskiyou Mountains of British Columbia, Washington, and Oregon.

The larva is unknown.

The habitat for this species in southern Idaho is bunchgrass in open juniper forest with scattered rock outcrops in the Central Basin and Range Ecoregion.

This moth has been collected twice at the same locality in southeastern Idaho.

The Stylopoda groteana is found in the southern Rocky Mountain region, central Arizona, and southern California.

The early stages of this moth are unknown.

Stylopoda groteana has only been collected in late August and early September in our area. This moth has been found most commonly during July and August across its entire range. It is nocturnal and comes to lights.