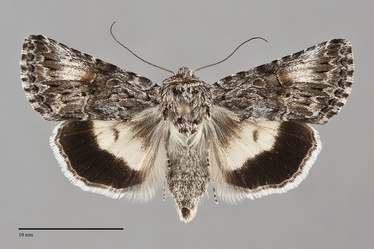 Sympistis saxatilis is a small (FW length 13 - 14 mm) moth that flies in eastern Oregon and Washington in the fall. It has a gray forewing with a pale patch distal to the rust-filled reniform spot and a banded off-white hindwing. The forewing is relatively short and wide for a Sympistis. The color is slightly mottled gray, blue-gray in the lower median area, and slightly brownish gray on the distal wing, with a prominent unmarked white patch form the lateral reniform spot to the medial subterminal area. A thin black basal dash is present. The basal and antemedial lines are gray, double filled with blue-gray. The antemedial line is very irregular and is drawn medially at the basal dash. The postmedial line is double, gray, and filled with pale gray, evident at the costa and posterior to the pale patch but not across it. The pale subterminal line is very irregular, appearing broken into several pale patches near the outer margin. It is preceded by long black chevrons between the veins in the subterminal area and a dark gray spot at the apex. The terminal line is black. The fringe is checkered with off-white to light gray and dark gray. The orbicular spot is outlined in dark gray and filled with light gray peripherally and a darker gray central ocellus. The reniform spot is double, gray with light filling, much darker on the medial side than on the lateral side, and filled centrally with rust-colored scales. The claviform spot is gray, strongest anterior and lateral, and filled with light gray. The hindwing is cream with gray basal suffusion and a small dark discal spot. A wide black marginal band is present. The fringe is tri-colored, yellow, gray, and white. The head and thorax are grizzled medium gray with transverse barring on the collar. The male antenna is filiform.

This species can be identified by the pale patch lateral to the rusty reniform spot, in combination with a cream and black hindwing. The only similar species is Sympistis sagittata, found in southern Oregon in our region, but it has an oblique black median line on the anterior forewing that S. saxatilis lacks. It also has a pale dentate subterminal line, a blackish gray distal forewing, and lacks a discal spot on the dorsal hindwing.

This species is rare and sporadic in dry meadows, sagebrush steppe, canyonlands, and open ponderosa pine forests at middle elevations east of the Cascades.  It is associated with lithosol (bare stony soil) habitats.

Sympistis saxatilis is found in central portions of Idaho, Oregon, and Washington. Most records are from the Blue Mountains of Oregon and Washington and the adjacent Idaho Central Batholith.

No records of this species from outside the Pacific Northwest are known to us.

The adults fly from mid-August through September. This species usually appears during the second week in September in the Columbia Basin. It is nocturnal and come to lights.