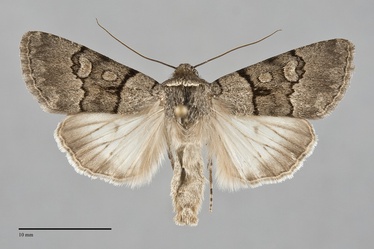 Sympistis columbia is a medium-sized (FW length 16 - 17 mm) gray moth that flies in forests east of the Cascade and Coast Range divides during the summer. It has strong black transverse lines, a black claviform spot of similar thickness to those lines, and black-rimmed pale-filled orbicular and reniform spots. The forewing is even gray, sometimes slightly lighter medial to the antemedial line and usually with darker gray in the lateral subterminal area. The antemedial, and postmedial lines are jet black. The basal line is short, located near the wing base. The antemedial line is thick, slightly excurved and oblique from anteromedial to posterolateral. The claviform spot is similar in thickness and appear as a short branch from this line. The postmedial line is thinner than the antemedial line, weakly scalloped, slightly excurved near the lateral reniform spot and touching the lower spot, then gently curved to meet the trailing margin at a right angle. The median line is diffuse, dark gray, often only evident on the costa. The pale subterminal line is diffuse and very faint, often only evident as an irregular transition from the darker subterminal area to the lighter terminal area. The terminal line is a series of gray lines between veins. The fringe is gray. The orbicular and reniform spots are black, thinner than the lines. The orbicular spot is oval, filled with the ground color with or without a few peripheral cream-colored scales. The reniform spot is kidney-shaped, filled with the ground color and more numerous pale scales. The hindwing is slightly pearescent pale gray with ill-defined dark gray marginal band, diffuse discal spot, dark veins, and thin terminal line. The fringe is white with a base of inner yellow and outer gray lines. The head and collar are smooth gray-brown with a light edge on the collar. The rest of the thorax is gray. The male antenna is filiform.

This species is most likely to be confused with Sympistis cherti, a widespread and common species with which it flies. Compared to S. columbia, this species is slightly larger, has more heterogeneous forewing color with a powdery mixture of dark and light scales and greater contrast between light and dark areas, and has ill-defined dark shading in the median area.

The larva is smooth with a raised dorsal hump near the tail.  The color is gray to light brown with fine mottled lines.  It is illustrated by Miller and Hammond (2003).

This species is relatively common in mixed hardwood-conifer forests at middle to high elevations in the Cascades and Rocky Mountains.

Sympistis columbia is found in forests east of the Cascade and Coast Range Divides as far north as the southern third of British Columbia and as far east as the Panhandle of Idaho. It has been collected often on the east slope of the Cascades and in the Blue Mountains of southeastern Washington.  In Oregon, it is widely distributed in the Cascades, Coast Range, and Siskiyou Mountains.

The range of this species extends south to central California.

This species is a foodplant specialist feeding on ocean spray (Holodiscus discolor) in the Rosaceae.

The flight season of S. columbia begins in early July and lasts through September in the Northwest. It is a nocturnal moth that is attracted to lights.