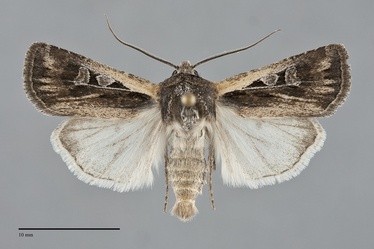 Euxoa laetificans is a sexually dimorphic, stubby-winged, small to medium-sized Euxoa (FW length 13–16 mm) that flies in steppe and dry forest habitats in late summer and early fall. In males, the forewing is brownish; in females, it is gray with a pale costal margin and a long thick basal dash. The forewing is relatively short for the genus. Males have an ochre-tan to fawn ground color. The cell is darker brown to dark gray-brown, with a surrounding halo of similar but slightly lighter color around the cell. The cubital vein is light whitish gray to the end of the cell, but its branches are dark with adjacent dark scales, producing a streaky pattern through the subterminal area. The costal margin is cream-colored to the anterior cell. The terminal area is gray except at the apex. A thick black basal dash is joined to the similar black claviform spot and appears to extend to the mid-forewing. Females are silvery gray with dark suffusion similar to the males and a whitish gray costal margin. The lines are relatively obscure. Small pairs of gray spots are present on the costa at the origins of the basal, antemedial, and postmedial lines. An excurved black segment of the antemedial line is present on the mid-wing at the base of the claviform spot. No portion of the median line is present. The postmedial line is weakly scalloped, evident as the excurved transition between dark shading in the median area near the cell and the lighter ground color in the subterminal area. The subterminal line is evident as a jagged transition between the subterminal area and gray terminal area. The uneven border is exaggerated by black chevrons between the veins on the mid-wing. The terminal line is black, thin or a series of spots. The fringe is tan to gray with a tan base and faint darker striations. The orbicular and reniform spots are outlined in black line with cream or whitish gray. The orbicular spot is small to moderate, round with a complete outline, or oval or elongate and open toward the costa, sometimes reaching the reniform spot, filled with the ground color. The reniform spot is kidney-shaped, filled centrally with the ground color and a narrow gray bar or lunule, the lower end is traversed by the pale cubital vein. The black claviform spot appears to be the terminal basal dash. The hindwing is pure white with a dark terminal line anteriorly in males; smoky gray with a pale base, dark terminal line, and white fringe in females. The head and posterior thorax are brown-gray. Males have a collar with burnt orange base and bright red-brown edge separated by a black line, that of females is similarly patterned but powdery gray with at most a slight reddish tint. A frontal tubercle is present. The male antenna is biserrate. This species is a member of the large subgenus Euxoa.

This species can usually be identified by its small size and stubby wings, red-brown males and gray females with pale costas and moderately streaked pattern that includes a pale cubital vein to the reniform spot, long black basal dash, and white male and even gray female hindwings with white fringes. It resembles several other fall-flying Euxoa species. Euxoa quadridentata is similar in color but has a sharply toothed pattern on the distal wing at veins M3 and CuA1 that is lacking in E. laetificans, and the pale costa extends distal to the reniform spot. Euxoa laetificans also resembles the form of Euxoa olivia has a pale costa. This species is usually larger and longer-winged than E. laetificans. The subterminal line of E. laetificans is obscure and the transition to the terminal area is very uneven while the line of E. olivia is visible, light-colored, and much smoother.

This species is widely distributed in forest and woodland habitats throughout much of western North America.  In the Pacific Northwest, it is found in low-elevation moist sagebrush steppe and meadows near marshes or riparian zones along creeks and rivers.  It is often common in this restricted habitat.  It is moderately common in juniper woodlands, but is rare or absent from more general forest habitats and dry sagebrush steppe.

Euxoa laetificans is found in the dry interior of the Pacific Northwest south of southern British Columbia. It has been found in the Columbia Basin, the Blue Mountain and Basin and Range biomes of eastern Oregon, the Snake River Plain in Idaho, and western Montana.

The range of this species extends east to southern Saskatchewan from British Columbia, then south to southern Colorado and Utah, central Nevada, and east-central California.

This species is a soil-surface feeding cutworm that feeds on general herbaceous vegetation including such families as the Fabaceae, Asteraceae, and Chenopodiaceae.

Adults fly in late summer and early fall, usually slightly earlier than many of the other late-season steppe Euxoa species. They have been collected from late July to mid-September in the Pacific Northwest. It is a nocturnal species that comes to lights.