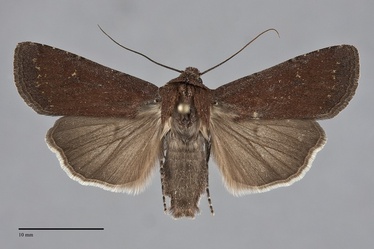 Euxoa excogita is a uniform, rich red-brown, small to medium-sized Euxoa (FW length 15–18 mm) that flies in forests in late summer. It has reduced black markings, light scales in the reniform spots, a similar light subterminal line, and a dark hindwing. The forewing is slightly darker and grayer in the terminal area and is nearly devoid of dark markings. The basal, antemedial, and postmedial lines form pairs of gray spots flanking pale yellow scales on the costa and are extremely faint dark and light gray on the rest of the forewing, not evident except on close inspection. The median line is absent. The subterminal line is pale ochre or gray, usually a slightly irregular series of diffuse spots but sometimes complete. It is preceded by a shade of the same color as the terminal area, and the fringe is the same color. The orbicular spot is usually absent. The reniform spot is a powdery lunule of pale scales along the lateral side of a very faint gray spot. No claviform spot is present. The hindwing is brown-gray with darker gray margin, with dark veins, discal spot, and terminal line. The hindwing fringe is white with a ochre and gray base. The head and thorax are the red-brown forewing color with a black transverse line on the distal third. A frontal tubercle is present. The male antenna is biserrate. Euxoa bicollaris is place in the subgenus Euxoa and is a member of the Euxoa infausta species-group.

Euxoa excogita can usually be recognized by its mid-summer flight, relatively large size, uniform dark brown-red color, and limited markings dominated by the yellow margin of the reniform spot and subterminal line. It is most similar to Euxoa brunneigera and was considered to be a Rocky Mountain subspecies of it at the time of the MONA fascicle (Lafontaine 1987) but is now recognized as distinct due to a large zone of overlap and consistently different appearance. Compared to E. brunneigera, E. excogita is slightly larger, is darker and more uniform red-brown, and has much less of a dark pattern of lines and spots. By comparison, E. brunneigera appears more brown Euxoa excogita can be told from the similarly-colored species in the subgenus Palaeoeuxoa, Euxoa mimallonis, Euxoa biformata, and Euxoa shasta, by its smaller size, darker hindwing, and the presence of light yellow scales in the forewing spots. These moths have paler hindwings, at a minimum at the base.  Euxoa excogita could conceivably be confused with the unrelated species Apamea cogitata in the tribe Apameini which has a similar color, but the light filling of its reniform spot is much greater than in E. excogita. If in doubt, structural differences can be observed under magnification. Euxoa excogita has a frontal tubercle which species of Apamea lack. The genitalia of Apamea differ greatly from those of Euxoa. The valves of Apamea are greatly expanded distally and separated from the rest of the valve by a narrow neck and a saccular extension along the ventral valve, while the females have dorsoventrally flattened ovipositor lobes, unlike the conical ones of Euxoa.

This species is found in dry forests throughout much of western North America.  In the Pacific Northwest, it occurs in juniper woodlands across central and eastern Oregon, extending northward in the juniper-oak woodlands along the east slope of the Cascades.  It is particularly common at middle elevations in mixed hardwood-juniper woodlands of central Oregon. It is common on dry ridges along the east slope of the Cascades and in the Blue Mountains.

Euxoa excogita is found along the east slope of the Cascade Mountains in southern British Columbia and Washington. It is more widely distributed in the mountains of eastern Oregon, with multiple records from the Blue Mountains as well as in the Cascades. It has also been found in east-central Idaho and western Montana.

This species is found in the Rocky Mountains from Montana to Colorado and Utah outside of the Pacific Northwest.

The adults are on the wing during the mid-summer, with records from late June to early August in our region. It is nocturnal and comes to lights.