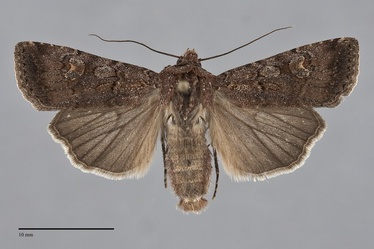 Euxoa infausta is a small to medium-sized Euxoa (FW length 14–16 mm) that flies from late spring through summer in a variety of dry habitats. It has a smooth to powdery tan-gray to gray-brown forewing with dark lines and spots, including an elliptical orbicular spot. It also has a dark hindwing and a black line across the collar. The forewing color appears gray with a brownish cast or vice versa, usually moderately dark. A slight reddish flush is sometimes present, but it never appears to be pink or red-brown. The ground is usually smooth, occasionally mottled with powdery dark scales with faintly darker veins in the subterminal area. The costa in the subterminal area and the terminal area are darker and grayer. The basal, antemedial lines, and subterminal lines are gray, double dots on the costa and unequal in strength elsewhere, filled with the ground color. The antemedial line has darker gray or black lateral and faint gray inner components, is variably pulled toward the base on the veins, and is angled slightly toward the outer margin. The median line is usually absent, occasionally faint. The postmedial line has a dark evenly scalloped medial component and a fainter outer one, either strong near the costa and fainter elsewhere or strong across the width of the wing, drawn toward the base on the costa, smoothly and widely arched around the reniform spot, sometimes touching the spot, and then angled 45° basad below the spot. A distinctive form of this species has complete antemedial and postmedial lines that are black abutting the median area and pale outside of the area. The subterminal line is a pale shade of the ground color or yellowish, thin or broken into a series of spot, slightly irregular, preceded by a dark shade that matches the terminal area and the fringe. A series of black lines comprises the terminal line. The orbicular and reniform spots are partially outlined in thin dark gray or black and are filled with the ground color or a slightly paler shade peripherally and the ground color centrally, rarely light gray peripherally in strongly mottled specimens. The orbicular spot is moderately large, elliptical, often open toward the costa or both anteriorly and posteriorly, sometimes lacking a dark outline. The reniform spot is usually incomplete, strongest on the inner side or open anteriorly and posteriorly, sometimes with a thin inner lining of pale tan scales. No claviform spot is evident. The hindwing is brown-gray with darker gray margin, with dark veins, discal spot, and terminal line. The hindwing fringe is white with a gray base. The head and thorax match the forewing color with a thin to thick black line across the mid-collar. A frontal tubercle is present. The male antenna is biserrate. Euxoa bicollaris is place in the subgenus Euxoa and is a member of the Euxoa infausta species-group.

This species can usually be recognized by its late spring or summer flight period, "dirt" brown-gray or gray-brown color, black pattern, elliptical orbicular spot, and the black line across the collar. It resembles Euxoa satis, Euxoa brunneigera, and Euxoa faulkneri, three other members of the Euxoa infausta species-group. These moths are closely related and have similar markings—they are best distinguished by color which is easiest to do if a large number of specimens are available. Euxoa satis is darker blackish gray and usually more strongly marked, often with pale yellow lining in the spots and subtle red-brown on the distal wing. Euxoa brunneigera is almost identical to E. infausta except of red-brown or pinkish color. In fact, it is possible that these represent ecotypes of a single species. Euxoa infausta tends to occur in lower elevation open habitats white E. brunneigera is found in higher elevation forests. Euxoa faulkneri only occurs in the Siskiyou Mountain region in the Northwest. It is more colorful and strongly patterned than E. infausta, often with a blue-gray tint to the forewing, dark median line on the anterior wing, and a dark terminal area.

Light forms of Euxoa infausta also resemble Euxoa permixta and Euxoa bifasciata, two rare species. Euxoa bifasciata resembles the form of E. infausta that has black lines across the entire wing but it lacks a black line on the collar that is found in E. infausta. Euxoa permixta has a black line on the collar but is more uniform tan-gray across the entire wing and has a smaller and rounder orbicular spot than E. infausta.

This species is widely distributed in dry forests and adjacent steppe throughout much of western North America.  In the Pacific Northwest, it is common to abundant in dry open Douglas fir and ponderosa pine forests from low to high elevations. It is particularly common in ponderosa pine forests during wet years, becoming uncommon during droughts.  It also occurs in juniper woodlands and sage steppe. It appears to be more common in steppe in the Columbia Basin than in the Basin and Range province.

Euxoa infausta is a common species east of the Coast Range and Cascades. It is found north to south-central British Columbia. It has a spottier distribution west of the Cascades. It is known from Vancouver Island and adjacent islands in the Gulf of Georgia as well as in parts of western Oregon.

The range of E. infausta extends east across southern Canada to Saskatchewan and the Dakotas. It is limited to Alberta and western Montana in the Rocky Mountain region, but occurs further south to southern Utah in the Intermountain Region and to southern California near the Pacific Coast.

This species is a soil-surface feeding cutworm that feeds on various herbaceous vegetation including the families Fabaceae and Brassicaceae.

The adults of E. infausta have a very long flight period. They have been collected from early May to early September in our region.