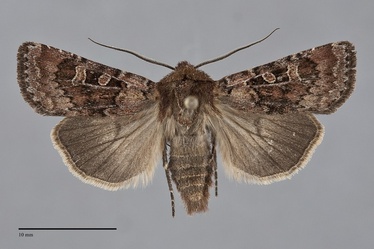 Euxoa rufula is a relatively small Euxoa (FW length 13–15 mm) that flies at middle to high elevations during late summer. It has a dark, red-brown forewing marked with dark transverse lines, light rimmed orbicular and reniform spots, and pale gray veins bordering a dark cell. The forewing appears relatively short. It is mottled dark red-brown, darker in the median and terminal areas and sometimes lighter gray-tan in the subterminal and antmedial areas. A few specimens are medium-dark gray medial to the antemedial line. the cell is darker, sometimes black. The cubital and radial veins are light gray. The basal, antemedial, and postmedial lines are dark gray, double with components of unequal strength, filled with a light shade of the ground color, tan or gray. The basal and antemedial lines are slightly irregular and angled toward the outer margin. The median line is dark gray, diffuse, faint to prominent. The postmedial line has a dark weakly scalloped inner component and a very weak or absent outer component, is drawn toward the base on the costa, smoothly curved around the reniform spot, and near straight at a 45° angle toward the base below the cell. The subterinal line is pale red-brown to gray, faint to complete across the forewing, and slightly irregular. It is preceded by a dark gray shade and often a series of dark gray chevrons between the veins on the mid-forewing. The terminal line is a series of dark spots or triangles, often accentuating the serrate margin. The fringe is grayish red-brown. The orbicular and reniform spots are outlined in black outer and light gray to tan inner lines, and are filled with red-brown. The orbicular spot is round, complete or open toward the costa. The reniform spot is kidney-shaped, sometimes obscured at the lower end by the pale vein and sometimes obscuring the vein. The claviform spot is absent or small, black or dark gray. The hindwing is tan-gray with darker suffusion toward the outer margin, with dark discal spot, veins, and terminal line. The hindwing fringe is off-white with a two-toned ochre and gray base. The head and thorax are dark red-brown, often with a weak gray or black line across the distal collar. A frontal tubercle is present. The male antenna is weakly bipectinate. Euxoa rufula is placed in the large subgenus Euxoa.

This species can usually be identified by its montane forest habitat, small size, dark red-brown color, dark cell, and gray radial and cubital veins. Specimens with pale tan or gray on the base are especially distinctive. It is most likely to be confused with Euxoa divergens, a common species with which it flies, which can be quite similar. The pale veins are usually white in E. divergens, gray in E. rufula. The orbicular spot is typically small and round in E. rufula and a larger tilted oval in E. divergens, and the claviform spot is smaller in E. rufula, not reaching the level of the orbicular spot whereas it usually extends to the spot and often reaches lateral to it in E . divergens. The collar of E. rufula is nearly unicolorous, while that of E. divergens is usually pale at the base with a strong black transverse line. Structurally, the tip of the uncus of E. rufula is flattened, which can usually be observed by brushing the scales from the tip of the abdomen and examination with moderate magnification, while that of E. divergens is cylindrical. Red-brown specimens of Euxoa intrita could potentially be mistaken for E. rufula, but E. intrita is most common at lower elevations. It lacks pale veins and lining of its spots.

The type locality of the synonym Agrotis basiflava Smith is British Columbia.

Euxoa rufula has been found in the Coast and Cascade Ranges in southwestern British Columbia through Oregon. It also occurs in the western Rocky Mountains.

The range of E. rufula extends north to southern Yukon Territory and south to New Mexico and Arizona in the Rocky Mountains and to southern California through the Sierra Nevada and Transverse Ranges.

Adults fly in late summer and early fall. The records from the Northwest extend from late July to mid-September. It is nocturnal and comes to lights.