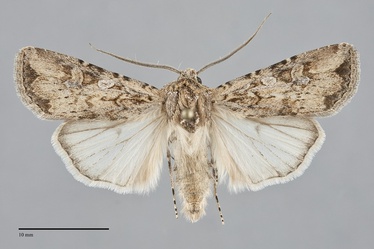 Euxoa olivia is a very common, fall-flying, small to medium-sized Euxoa (FW length 13–17 mm) that is sexually dimorphic and variable, usually with streaky warm brown males with a yellowish costa and grayer females that also come in a plain mottled form. Males typically have a pale ochre, tan, or orange-tan ground color. The mid-base and central median area are suffused with darker gray to gray-brown, sparing a pale streak through the fold. The distal cubital vein is usually white and the other veins are black. The cell is dark gray, brown-black, or black, and the costa is cream to ochre from the base to the postmedial line. The terminal area is dark gray. A diffuse black basal dash is present. Less common forms have a more uniform gray-tan forewing with a brown cell and slightly paler costa, or are more mottled tan with light gray along the costa and gray in the terminal area. Females are dimorphic. Roughly half are similar to the most common form of the male but are grayer, lacking warm brown, and have silver-white costas. The other form is powdery light brownish gray with slightly darker gray terminal area. The lines are dark gray, variable present, weak and largely obsolete in forms with a pale costa and complete in powdery gray females. Typical males have twin dark spots on the costa at the line origins, a laterally convex segment of the antemedial line at the base of the claviform spot, and a toothed postmedial line evident as the demarcation between the darker median area and the lighter subterminal area. In the lighter females, the basal and antemedial lines are thick on the costa and lighter gray elsewhere, filled with the ground color, slightly irregular and weakly angled toward the outer margin. The median line is a dark spot on the costa. The postmedial line is toothed, drawn toward the base on the costa, bent basad below the costa, and nearly straight toward the base at a 45°angle. The subterminal line is pale ochre, tan, or light gray depending on the color of the moth, irregular with a blunt "W"-mark on the mid-forewing. It is preceded by dark gray shading on the costa and posterior forewing and a series of long black chevrons between the veins on the mid-forewing. The terminal line is dark, broken at the veins. The fringe is variable, most often light gray to luteous gray with longitudinal stripes. The orbicular and reniform spots are outlined in outer gray to black and inner whitish gray to pale ochre. The orbicular spot is oval or an irregular elongate bar, sometimes entirely pale but usually with a darker gray center. The reniform spot is moderately large, kidney-shaped, filled similarly but with more dark gray or brown-gray centrally. The claviform spot is moderate-sized, narrow, thin gray to nearly solid black. The male hindwing and fringe are white, with a poorly demarcated thin band of dark gray near the outer margin, dark gray distal veins and terminal line, and a small weak discal spot. Females have a gray hindwing with a pale gray base, with more extensive dark veins, more prominent discal spot, and white fringe. The head and thorax are gray-tan. Specimens with a pale costa have similar color at the base of the collar, separated from the tan edge by a black transverse line. The male antenna is bipectinate and appears relatively thick for the genus, tapering over the distal third. Euxoa olivia is one of two Pacific Northwest members of the subgenus Heteroeuxoa, characterized by asymmetrical saccular extension with the right one long and stout with a fin-like extension near its tip.

This common moth is often confused with many other Euxoa species. The typical form of the male can usually be identified by the fall flight, warm brown color, light yellowish costa, pale streak through the fold, and thick antennae. It is most likely confused with similar forms of Euxoa auxiliaris, Euxoa brevipennis, and Euxoa laetificans. Euxoa auxiliaris is usually larger and has a longer, narrower, and more rectangular forewing. Its similar form has a light yellow posterior margin that contrasts with the rest of the forewing, more similar to other pale areas in E. olivia. Euxoa brevipennis is grayer without yellow or brown color, and Euxoa laetificans is smaller, has stubbier forewings, and is more reddish. The form of E. olivia females with a pale costa resembles males of E. brevipennis, but its females are more similar to the pale mottled form of E. olivia. Females of E. olivia are fairly nondescript and are often misidentified or left unidentified in collections. The first clue to the correct identity is the fall flight period, usually September or October. They resemble a number of gray Euxoa species, but can usually be recognized by the lack of conspicuous dark or light pattern elements, evenly toothed postmedial line that is straight following a narrow bend in the cell, and pale-filled small oval or bar-like orbicular spot. Many females of E. auxiliaris are similar in color and pattern, but are larger and have a more arched postmedial line. Euxoa brevipennis females are more silvery-gray on the forewing than E. olivia, have a streakier pattern with a stronger "W" mark on the subterminal line, and have a lighter hindwing with a powdery gray suffusion. Euxoa cana is usually smoother gray than E. olivia with the pattern dominated by dark antemedial and postmedial lines. Euxoa messoria, a common and variable gray-tan moth, is smoother tan in color and has a larger oval orbicular spot that is filled with the ground color rather than contrasting light gray.

Pullman, Washington is the type locality of two synonyms of this species: Carneades enteridis Smith and Carneades vanidicus Smith.

This species is widely distributed in arid rangelands throughout much of western North America, including short-grass prairies on the Great Plains, and juniper woodlands and sagebrush steppe west of the Rocky Mountains.  In more natural habitats of the Pacific Northwest, it is common to abundant in open steppe and dry juniper woodlands at low to middle elevations.  During drought years, it can be abundant in dry open ponderosa pine forests along the east slope of the Cascades and also in high-elevation spruce-fir forests.  During wet years, it becomes rare or absent in forest habitats.  This species is a major agricultural pest, and massive epidemic outbreaks frequently occur in herbaceous crops at low elevations east of the Cascades.

Euxoa olivia is common and widespread at low to middle elevations east of the Cascade Range crest. It occurs north to southern British Columbia.

The distribution of this species extends west across southern Canada to southern Manitoba. In the south it extends to northern Texas in the Great Plains, to central New Mexico and southern Arizona in the Rocky Mountains and Southwest, and southern California near the Pacific Coast (Lafontaine 1987).

This species is a soil-surface feeding cutworm that feeds on general herbaceous vegetation is such families as the Rosaceae, Fabaceae, and Lamiaceae.  During epidemic outbreaks, it also feeds on grasses (Poaceae).

The adults fly in the fall, mostly during September to early October. It is one of the last Euxoa species to fly in most years.

This species is a major agricultural pest in the Pacific Northwest. Massive epidemic outbreaks frequently build up in herbaceous crops such as peppermint and alfalfa east of the Cascades.