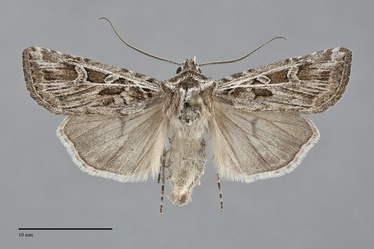 Euxoa melura is a rarely collected, pale brown-gray, small to medium-sized Euxoa (FW length 14–16 mm) that flies in steppe habitat during the early summer. Its forewing has pale veins and inner outlines of the spots. The forewing is gray-tan, darker brown to brown-gray in the cell and surrounding median and subterminal areas. The terminal area is relatively narrow, gray. A weak, usually broken, black basal dash is evident in some specimens. The cubital and radial veins are whitish gray, and the veins on the costa and on the distal wing, particularly below the apex and M3 and CuA1 are light gray. Many of the other veins on the posterior and distal wing are dark. Paired gray spots are present on the costa at the origins of the basal, antemedial, and postmedial lines. A segment of the antemedial line is evident on the mid-wing at the base of the claviform spot. No trace of the median line is evident. The toothed postmedial line is evident as a transition from darker median are to the lighter medial subterminal area. The subterminal line is pale gray, wide and slightly irregular with an offset below the apex and pale teeth where it is traversed by the pale veins. It is preceded by a gray shade on the costa and on the mid-forewing and also by thin black chevrons between the veins at and near the M3 and CuA1. The terminal line is dark gray, thin or a series of spots. The fringe is gray with a light tan base. The orbicular and reniform spots are partially outlined by black lined by light gray. The orbicular spot is oval, slanted with the anterior portion closest to the base, filled centrally with the ground color. The reniform spot is kidney-shaped, filled similarly to the orbicular spot but often paler. The clavifom spot is black, moderate-sized, and narrow. The hindwing is pale gray-tan, ill-defined gray toward the margin, with slightly darker gray discal spot and terminal line. The hindwing fringe is white with a gray to tan base. The head and thorax are powdery gray-tan with a thin black line across the mid-collar and light gray "frosting" on the edge of the collar and anterior tegulae. The frons bears a moderate tubercle. The male antenna is biserrate. Euxoa melura is a member of the large subgenus Euxoa.

This species can be identified by its relatively early flight season, gray-tan color, and streaked appearance with light veins and filling of the spots. It is most likely to be confused with Euxoa hardwicki and Euxoa olivalis, two streaky brown-gray species with which it occurs during early summer. Euxoa hardwicki is a rare species that flies near the Columbia River in the Columbia Basin. Its orbicular spot is an asymmetric oval, tapering toward the reniform spot, rather than oval as in E. melura. The orbicular spot of E. olivalis is elongate, bar-like, and is close to the reniform spot, unlike that of E. melura. Euxoa furtivus also flies with E. melura and has pale veins on the forewing. Its forewing is smoother brown, especially near the trailing and outer margins, and the subterminal line is preceded by a row of prominent black wedges that are more prominent than in E. melura. The early flight season distinguishes E. melura from many other streaky Euxoa species that fly during the fall.

This species is widely distributed in open habitats at low elevations east of the Cascades, but is relatively rare. Observations from Oregon suggest that it might be restricted to moist sagebrush steppe at the edge of wetlands or riparian zones along creeks and rivers. In Washington it is most often found in habitats with rocky outcrops and stony soil (lithosol) in sage steppe.

Euxoa melura appears to have a restricted range in our region. It has been found in the western portion of the Columbia Basin in Washington, in the eastern portion of the Northern Basin and Range province in southeastern Oregon, and in southern Idaho. Lafontaine (1987) includes southwestern Montana in the range of this species.

The range of E. melura extends to southeastern Wyoming, northwestern Colorado and south-central Utah from the Northwest. A single locality is also shown for southern California on the Moth Photographers Group website.

Adults are on the wing early in the Euxoa season, with most records from early June to early July in the Pacific Northwest. It is nocturnal and comes to lights.