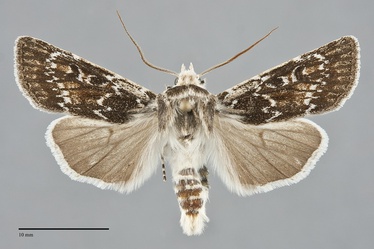 Euxoa aurulenta is a variable, whitish cream to dark gray-brown Euxoa that is restricted to sand dune habitats during spring and early summer. It is small to medium-sized (FW length 14–18 mm) with long and apically pointed forewings. The color is variable, both within populations and over larger geographic distances. The populations from the Columbia Basin are powdery whitish gray, light ochre-gray, or sandy tan, sometimes dark gray-tan to blackish red-brown. Those from northern Nevada and the Great Plains are sandy yellow-tan, often reddish with a paler costa. The lines and spots are also variable, almost absent to normal in prominence. The lines are strongly toothed on the veins and are most evident as pale filling, long teeth which cross the light filling, and dark lines on the veins near the tips of the teeth. The antemedial and postmedial lines are similar in this regard. The terminal line is absent or a row of black spots, and the median line is usually absent. The pale subterminal line is sinuous but often absent or faint, more consistently present in the Nevada and Great Plains populations than in the Columbia Basin. The spots are pale, filled with darker gray in pale specimens and a gray shade of tan or red-brown in darker specimens. The orbicular spot is small, usually a long oval but sometimes shorter. The reniform spot is boomerang-shaped. The claviform spot is usually absent. The hindwing is whitish gray-tan with a slight reddish tint, slightly darker distal to the discal spot. The hindwing of the Nevada and Great Plains populations is more strongly two-toned. The head and thorax match the forewing. The male antenna is bipectinate, tapering over the distal third. This species lacks a frontal tubercle unlike most other Euxoa species. Euxoa aurulenta is a member of the subgenus Pleonectopoda which is characterized by a subbasal twist or coil in the male vesica which is only evident if the vesica is inflated during dissection.

This species can be recognized by its washed-out, whitish to sandy tan or red-brown color, rarely dark with contrasting white lines, spring or early summer flight, and strict association with sand dunes. It is unlikely to be confused with any other moth in its dune habitat.

Euxoa is a very large genus with many similar species, many of which are also quite variable. The genus is defined by a saccular extension of the valves in males and sclerotized plates on the dorsal and ventral ductus bursae in females. The genus was revised by Lafontaine (1987) in the Moths of North America series and is divided into eight subgenera based on structural characters. These moths are among the most difficult to identify. Even though the forewing color and strength of various markings can vary significantly in some of the species, the shape of the lines and spots and the color of the hindwings (often different in the sexes) are more constant. The habitat and flight period are important in helping to narrow the possibilities.

This species is widely distributed throughout central and western North America in dry grassland habitats.  In the Pacific Northwest, it appears to be narrowly restricted to sand dunes or sandy sediments along rivers or lakes.  It may be locally frequent in this very restricted habitat. It is very local throughout its range.

Euxoa aurulenta is found in the Columbia Basin and the Snake River Plain in the Northwest. It appears to be absent from dunes in south-eastern Oregon.

This species has a spotty distribution in North America, occurring in isolated populations from the Great Lakes to Alberta south to Nebraska, Colorado, Arizona, and Nevada.

No information is presently available regarding larval foodplants of this species, but it probably feeds on herbaceous vegetation based on related species.

Adults fly earlier than most other Euxoa species. It has been collected from late April to mid-June in the Pacific Northwest. It is nocturnal and comes to lights.