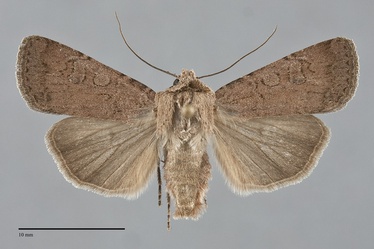 Euxoa brunneigera is a small to medium-sized Euxoa (FW length 13–16 mm) that flies in forests east of the Cascades during the summer. It has a reddish-tan or brown forewing with thin dark lines and spots that include an elliptical orbicular spot. The forewing color varies from pink-tan, gray-brown with a red tint, to reddish brown, and is usually smooth but occasionaly mottled with gray long the veins. The costa in the subterminal area and the terminal area are darker and grayer. The basal, antemedial lines, and subterminal lines are gray, double dots on the costa and unequal in strength elsewhere, filled with the ground color. The antemedial line is dark gray or black abutting the median area and faint gray medially, slightly irregular, variably pulled toward the base on the veins, and angled slightly toward the outer margin. The median line is usually absent, occasionally faint. The postmedial line has a dark evenly scalloped medial component and a fainter outer one, either strong near the costa and fainter elsewhere or strong across the width of the forewing, drawn toward the base on the costa, smoothly and widely arched around the reniform spot, sometimes touching the spot, and then angled 45° basad below the spot. The subterminal line is a pale shade of the ground color or yellowish, thin or broken into a series of spot, slightly irregular, preceded by a dark shade matching the terminal area. The fringe is concolorous with the terminal area a thin dark terminal line. The orbicular and reniform spots are partially outlined in thin dark gray or black and are filled with the ground color or a slightly paler shade peripherally and the ground color centrally, rarely light gray peripherally in some strongly mottled specimens. The orbicular spot is moderately large, elliptical, often open toward the costa or both anteriorly and posteriorly, rarely lacking a dark outline. The reniform spot is usually incomplete, strongest on the inner side or open anteriorly and posteriorly, sometimes with a partial lateral or complete inner lining of pale yellow scales. No claviform spot is evident. The hindwing is brown-gray with darker gray margin, with dark veins, discal spot, and terminal line. The hindwing fringe is white with a gray base. The head and thorax match the forewing color with a thin to thick black line across the mid-collar. A frontal tubercle is present. The male antenna is biserrate. Euxoa bicollaris is place in the subgenus Euxoa and is a member of the Euxoa infausta species-group.

Euxoa brunneigera can usuallly be recognized by the mid-summer flight period, reddish forewing, and elliptical orbicular spot that is typical of its species-group. It is closely similar to Euxoa infausta, differing mainly in wing color but also in preference for higher elevation habitats. The relationship of these species is still enigmatic, and it possible that they represent ecotypes of the same plastic species. Euxoa brunneigera is redder and often smaller while E. infausta is gray-brown or gray-tan with similar oval orbicular spot and variation in the forewing markings. Strongly red specimens of E. brunneigera resemble to Euxoa excogita, another species in the same species-group that was considered to be a Rocky Mountain subspecies of it at the time of the MONA fascicle (Lafontaine 1987). Euxoa brunneigera is slightly browner and has a much more developed pattern of dark lines and spots.

This species is widely distributed in coniferous forests.  In the Pacific Northwest, it is common in dry open pine and fir forests at middle to high elevations. It is particularly common on dry ridgetops.  It is relatively uncommon in mixed hardwood-conifer forests of the Siskiyou Mountains in southwestern Oregon. This species is replaced by E. infausta at lower elevations and by E. excogita in the central Rocky Mountains.

The range of E. brunneigera extends south to southern California from the Pacific Northwest. The eastern limits are poorly understood due to confusion with E. excogita.

No information is presently available regarding larval foodplants of this species, but it is probably a soil-surfacing feeding cutworm that feeds on herbaceous vegetation based upon related species.

Adults fly in the summer and have been collected from mid-June through August in the Northwest. They are commonly collected at lights.