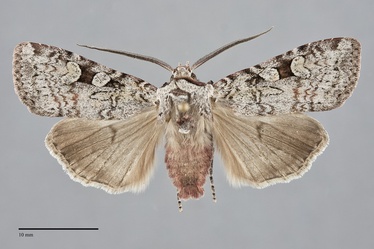 Euxoa vetusta is a fairly large and broad-winged Euxoa (FW length 17–20 mm) that is restricted to the western part of our region. It has a silvery-gray forewing, black in the cell between the spots, a reddish hue to the abdomen, and a broad male antenna. The forewing is powdery silver-gray, sometimes with a subtle pink or green hue in the median area. The terminal area is gray. The cell is dark gray to black, darkest between the spots. The basal, antemedial, and postmedial lines are dark gray to black, double-filled with the ground color. The basal and antemedial lines are slightly irregular, oriented nearly perpendicular to the forewing. The median line is dark gray, dark red in a few specimens, slightly irregular to scalloped, angled at the reniform spot. The postmedial line has a stronger toothed inner component and a weak smooth outer component, is drawn sharply toward the base on the costa, bluntly excurved around the end of the cell, and nearly straight or slightly concave at an oblique angle toward the base below the cell. The postmedial line is light gray, similar to the ground color, and slightly irregular. It is preceded by a dark gray spot on the costa and a powdery gray shade across the rest of the forewing. The terminal line is a series of black spots. The fringe is gray, sometimes reddish. The orbicular and reniform spots are partially outlined in black, are filled with a slightly lighter shade of the ground color, and are moderately large. The orbicular spot is oval, often nearly touching the renform spot. The reniform spot is broadly kidney-shaped. The claviform spot is moderate to large, weak to complete, and has a rounded tip. The hindwing is brownish gray with very faint discal spot and a darker terminal line. The hindwing fringe is white with a gray base. The head and base of the collar are light brown-gray to reddish. The mid-collar has a broad black stripe and the tip and remainder of the thorax are silver gray. The male antenna is broadly bipectinate. Euxoa vetusta is a member of the subgenus Pleonectopoda, characterized by a subbasal coil or twist in the male vesica evident only if the vesica is everted and inflated during preparation.

This species can usually be identified without difficulty because if its western distribution, large size, and stout appearance, silver gray color with large spots and black in the cell. Males have the broadest antennae of any Euxoa in our region and are unmistakable. Females can usually be identified, despite absence of this structural character.

This species occurs in coastal rainforests, mixed hardwood forests, and mixed hardwood-conifer forests at low to middle elevations west of the Cascades, and is moderately common in these restricted habitats.  It is rare in oak woodlands of southwestern Oregon, in spruce-fir forests at high elevations along the summit of the Cascades, and in ponderosa pine forests at middle elevations along the east slope of the Cascades.  This species is considered to be management-sensitive, and benefits from small disturbed openings or clear-cuts in the forest that support early successional vegetation.

Euxoa vetusta is found west of the crests of the Coast and Cascade Ranges from southern British Columbia south through Oregon.

The range of this species extends south to central California along the coast.

Adults have a fairly long flight season and fly from late spring to early September. Most records are from late June on. They are nocturnal and come to lights.