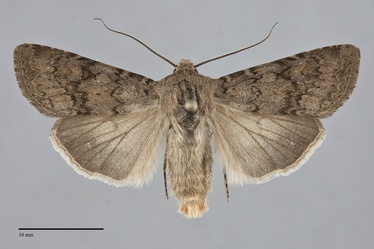 Euxoa extranea is a moderate-sized, brown-gray Euxoa (FW length 14–18 mm) that flies at middle to high elevations in the Cascade Range during the summer. It is usually marked with a dark median line, oval orbicular spot, and heart-shaped reniform spot. The forewing apex is often slightly pointed. The color is smooth brownish gray, with slightly darker gray terminal area and shade at the subterminal line. The basal, antemedial, and postmedial lines are gray, double with components of unequal strength, filled with the ground color. The basal and antemedial lines are similar, zigzagged on the veins and oriented perpendicular to the forewing. The median line is black, thick and moderately well-defined or diffuse, slightly irregular, gently excurved, interrrupted by the medial reniform spot. The postmedial line has a strongly toothed inner component and weak or absent smoother outer line, is strongly drawn toward the base on the costa, bent basad near the costa, strongly oblique toward the base below the bend with a slightly concave segment below the reniform spot. The subterminal line is pale gray or luteous, powdery and weak, often broken into small diffuse spots. It is preceded by a diffuse gray shade, often condensed into a series of diffuse black spots or wedges between veins on the mid-forewing. Black spots comprise the terminal line. The fringe is concolorous with the terminal area. The orbicular spot is oval, outlined by black at the medial and lateral ends, filled with uniform gray that is slightly lighter than the ground and lacking an ocellus. The reniform spot is kidney-shaped or heart-shaped, incompletely outlined in outer black and inner powdery light yellow lines and filled with the ground color or lighter gray similar to the filling of the orbicular spot. The claviform spot is absent. The hindwing is brownish gray with faintly darker discal spot and veins. The hindwing fringe is light gray or white with a darker base. The head and thorax are brownish gray, usually with a thin black line across the distal collar. The male antenna is strongly biserrate with long fasciculations. A flat-topped frontal tubercle is present. Euxoa extranea is placed in the subgenus Pleonectopoda because of a twist near the base of the male vesica.

This species can usually be recognized by its even brownish gray color, strong median line, toothed postmedial line, incomplete oval orbicular spot without a darker center, strongly indented outer margin of the reniform spot, and absence of a claviform spot. It resembles several other gray and brown Euxoa species with which it flies at high altitude, including Euxoa terrenus, Euxoa simulata, Euxoa comosa, and Euxoa altens. Euxoa altens is the most similar in pattern to E. extranea but is browner and more powdery. Its lines are fainter, especially the ones near the median area. Euxoa simulata has a similar-shaped reniform spot, but it is filled with yellow-brown, not gray. Euxoa terrenus is browner and more mottled than E. extranea, its reniform spot is less indented, and it has a rounder orbicular spot that often has a dark center. Euxoa extranea is superficially similar to Sympistis acheron and Sympistis glennyi and flies with both of them. They are more powdery brown, with strongly scalloped postmedial lines and more irregular subterminal lines. As members of the subfamily Oncocnemidinae they are structurally dissimilar to Euxoa, lacking frontal tubercles, saccular extensions in the male genitalia, and narrow sclerotized plates in the ductus bursae of the female genitalia.

The type locality of Agrotis extranea Smith is stated as Montana but is thought to be Mt. Hood, Oregon.

This species is found in subalpine spruce-fir forests and subalpine meadows at high elevations in the Cascade Range.  A local epidemic outbreak was observed in the disturbed blast zone of Mt. St. Helens following the volcanic eruption, with larvae feeding on early successional lupine plants in a habitat of ash and pumice.  This species is considered to be management sensitive, depending on disturbed openings and meadows in the forest.

Euxoa extranea flies in the Cascade Range from northern Washington to southern Oregon in our region.

The range of this species extends south through California to our south. It is found in the Cascade Range, including on Mt. Shasta, as well as in the Sierra Nevada.

This species is a soil-surface feeding cutworm that feeds on herbaceous vegetation such as lupines (Lupinus spp.) in the Fabaceae.

Adults are on the wing in summer, with most Pacific Northwest records from mid-July to mid-August. It is nocturnal and comes to lights.