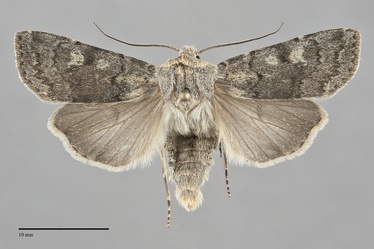 Euxoa vallus is a geographically variable, medium-sized moth (FW length 16–19 mm) that flies in rocky tundra. It is gray, yellow-gray, or rusty depending on locality, with a forewing that has a variable pattern of yellow suffusion and dark lines and pale spots. Specimens from near the West Coast are gray to blue-gray in ground color, variably suffused with light bluish gray to yellow scales, usually strongest outside of the median area. The cell between the spots is darker blue-gray in a few specimens. Populations from the eastern part of our region near the spine of the Canadian Rocky Mountains are more uniform yellow-gray, often suffused with rusty orange. The basal, antemedial, medial, and postmedial lines are similar, simple, dark gray bordered by a slightly lighter shade of the ground color. The basal and antemedial are transversely oriented and drawn toward the base on the veins. The median line is dark gray, diffuse. The postmedial line is sharply toothed on the veins, drawn toward the base on the costa, bluntly curved around the reniform spot, and strongly angled toward the base below the spot. The subterminal line is pale yellow, variable in thickness but usually complete, slightly irregular with an offset below the apex and a small "W" mark on the mid-forewing. It is preceded by a thin gray shade that is strongest on the costa. The terminal line is variable, thin or a series of gray spots. The orbicular and reniform spots are outlines by powdery pale yellow-gray, sometimes with a thin gray outer line, and filled with the ground color. The orbicular spot is a small oval. The reniform spot is kidney-shaped, moderate-sized. The claviform spot is absent. The hindwing is gray with darker discal spot, brown-tinted in the Rocky Mountain populations. The hindwing fringe is white with a pale gray base. The head and thorax are gray to yellow-gray, depending on the color of the moth, often strongly suffused with yellow or rusty-orange. The male antenna is biserrate. Euxoa vallus is a member of the subgenus Pleonectopoda. This subgenus is characterized by a subbasal coil or twist of the male vesica, only evident when the vesica is everted during dissection. Many species in this subgenus are found at high altitudes and latitudes.

This species can usually be identified by its alpine habitat, blue-gray, yellow-gray, or rusty forewing (depending on region), dark antemedial and postmedial lines, and pale-filled forewing spots. The Cascade and Coast range populations are distinctive due to their strong yellow shading on the forewing and thorax, while those from the Rocky Mountain region have a more diffuse yellow-gray or rusty. Euxoa macleani is a smaller alpine Euxoa (FW length <16 mm) that flies with blue and yellow populations of E. vallus. It is more uniform gray and has more prominent black transverse lines. Euxoa quebecensis is similar but usually has a duller, more powdery, and lighter gray forewing than E. vallus, and the filling of its reniform spot is darker than the filling of the orbicular spot rather than similar in both spots as in E. vallus. It occurs in mountains but is less common in the alpine tundra than E. vallus. Euxoa vallus can also be confused with Euxoa comosa. This common and variable species is more washed-out gray than E. vallus in the Rocky Mountain region and lacks dark lines, and browner than E. vallus in the mountains near the Pacific Coast.

This species is geographically outside of our region in addition to the variation between the Northwest Cascade and Coast Range population and those from the Canadian Rocky Mountain region described above. The populations from the Uinta Mountains of northeastern Utah are pale yellowish to pinkish gray with dark median lines. Those from western Wyoming are light gray with thick black antemedial, median, and postmedial lines. Similar populations from the Sierra Nevada are considered to be subspecies E. v. bivittata.

The type locality of the synonym Euxoa luteomaculata Hardwick is Okanogan County, Washington.

This species is widely distributed at high elevations near timberline in the mountains of western North America.  In the Pacific Northwest, it is limited to rocky tundra above timberline.  It may be locally common in this restricted habitat.

Euxoa vallus is found in two separate areas in the Northwest. It occurs in the Coast Range and Cascade Ranges as far south as northern Washington. The other is in eastern British Columbia in and near the Purcell Mountains.

This species is found near British Columbia in southwestern Yukon Territory and in western Alberta. It also occurs in the Rocky Mountains in Utah, Wyoming, and Colorado. Populations in the Sierra Nevada currently assigned to subspecies E. v. bivittata by Lafontaine (1987) differs in the shape of the lines and might eventually be considered to be a distinct species.

Adults fly in the summer several weeks after snowmelt. Pacific Northwest records are from early July to mid-August.