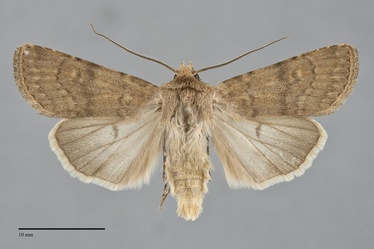 Euxoa comosa is one of the most variable species in the genus—at least in terms of shades of brown—both across the range of the species as well as within populations. It is typically a gray-brown small to medium–sized moth (FW length 13–18 mm) that flies in forests at all elevations during the summer. Its forewing is less often gray, commonly tinted with red, orange, or olive, with a simple pattern of toothed dark lines and indistinct spots. Most specimens are darker on the outer forewing, a gray shade preceding the terminal line with or without a similar dark terminal area. The basal and antemedial lines are similar, dark gray, double with components of unequal strength filled with a light shade of the ground color, or reduced to adjacent dark and light lines if the more faint component is absent. The antemedial line is darkest abutting the median area, oriented nearly straight across the forewing, toothed basad on the veins. The median line is dark gray, often prominent, moderately diffuse and variable in width from narrow to very wide, irregular, oriented nearly straight across the forewing. The postmedial line is dark, toothed on the veins, usually with a lighter-colored outer component, drawn basad on the costa, smoothly convex around the reniform spot, and angled slightly toward the base below the level of the cell. The subterminal line is pale, gray-tan, orange-tan in brown or reddish specimens, and yellow in many gray ones, usually broken into powdery spots, slightly irregular with a weak W-mark on veins M3 and CuA1. It is preceded by a dark gray shade, dark red-brown in reddish morphs, that is even across the wing or slightly darker between the veins. The terminal line is dark gray, thin or a series of spots. The fringe is similar to the terminal area. The orbicular and reniform spots are pale, usually a pale shade of the ground color or luteous. The orbicular spot is absent or a small circle or oval filled with the ground color. The reniform spot is relatively small, kidney-shaped, often incomplete anteriorly and posteriorly, with thin medial and thick lateral sides, usually filled with the ground color but sometimes with a darker shade. The claviform spot is absent. The hindwing is dark brown-gray with slightly darker gray margin, veins, discal spot, and terminal line. The hindwing fringe is two-toned gray. The head and thorax match the forewing color and lack dark marks. A frontal tubercle is present. The male antenna is biserrate with long fasciculae. Euxoa comosa is a member of the subgenus Euxoa.

This species is difficult to identify but can usually be determined by keeping it in mind for any brown, gray, or red-brown Euxoa that is found during late summer. It can often be recognized despite the variation in color by the pattern of single or weakly double dark transverse lines, often bordered by paler lines outside the median area, dark nearly straight median line, and relatively inconspicuous pale-rimmed forewing spots.

The common brown forms of Euxoa comosa resemble a number of other Euxoa species. Euxoa altens is a dull gray-brown moth that flies with E. comosa at high altitudes. It has a thin dark rim around the orbicular spot that is lacking in E. comosa, has less dark transverse lines, and usually lacks dark near the wing margin. Euxoa terrenus and Euxoa simulata are similar brown moths that fly with E. comosa in forests. Both of these species have double lines with components that are more equal in strength than those of E. comosa. They also have larger orbicular and reniform spots with dark outlines, unlike the small pale ones of E. comosa. Euxoa setonia occurs at low to mid-elevation sites with E. comosa and resembles it in having a strong median line. This line is usually smoother than that of E.comosa had has a prominent medial notch posterior to the reniform spot; a similar notch can be present in E. comosa but is usually part of greater irregularity. The orbicular and reniform spots of E. setonia are pale-filled rather than containing the ground color or a darker shade as in E. comosa. Euxoa scotogrammoides is a gray-brown species that lacks dark gray or black markings. It usually flies earlier in the season than E. comosa but can occur with it in montane forests. Its dark lines are less conspicuous than those of E. comosa and its subterminal line is more irregular.

An interesting situation exists in dry valleys in eastern Idaho and Colorado where a population of pale moths that are indistinguishable from E. comosa in pattern or structure overlap with typical dark E. comosa flying in nearby forests. This is discussed by Lafontaine (1987) who retains the use of the name Euxoa lineifrons for them, but acknowledges that this might be an example of overlapping "races." Euxoa lineifrons is pale gray-tan with dark transverse lines, including the median line, but are otherwise similar to the most common pattern of E. comosa.

Gray forms of E. comosa occur sporadically but are most common in the mountains of British Columbia. Euxoa macleani is a rarely collected gray moth that flies near rocky tundra in the North Cascades and British Columbia Coast Range. Most populations of E. comosa with which it occurs are brown and do not pose strong potential for confusion; however, these species are almost identical near Mt. Baker, Washington. At this location E. comosa can be recognized by a tan or gray base of the hindwing fringe, completely white in E. macleani. Euxoa quebecensis is also similar to gray E. comosa and flies with it in mountains and boreal forests. It is slightly bluish rather than brown-tinted. It has a dark spot in the lower reniform spot that is lacking in E. comosa and its hindwing discal spot is also larger and darker. Structurally, E. quebecensis is one of the few Euxoa species that lacks a frontal tubercle, present in E. comosa.

The brightest reddish E. comosa are found sporadically with typical gray-brown populations. They are most similar to Euxoa excogita but this species is less tinted with orange than E. comosa, lacks the dark lines, and has paler yellow scales in the reniform spot. Euxoa trifasciata is more similar in color to red E. comosa but is usually slightly larger and differs in having a thin dark outline to its orbicular spot. Euxoa tocoyae is also similar to red E. comosa in color and also shares the presence of pale-rimmed forewing spots lacking dark outlines. It has more diffuse antemedial and postmedial lines and its pale subterminal line is more irregular than that of E. comosa. It usually flies earlier in the summer but some overlap in the flight period is likely.

Populations of Euxoa comosa are arranged into five subspecies by Lafontaine (1987). Most of the Pacific Northwest populations are subspecies E. c. lutulenta (Smith) which is characterized by dark brown color. Populations from the mountains of eastern British Columbia are paler and grayer than those from most of our region. They show a trend toward the pale gray subspecies E. c. altera McDunnough which occurs on the Great Plains of Canada. Although no specimens from southern Idaho were examined for this project, specimens from this area are likely to show a trend toward yellow-brown and red-brown E. c. comosa (Morrison) which occurs in the southern Rocky Mountains. Subspecies E. c. annir (Strecker) and E. c. ontario do not occur in or near the Pacific Northwest.

This species is widely distributed in coniferous forest habitats throughout much of North America, although some populations also occur in prairie and desert habitats.  In the Pacific Northwest, E. comosa is moderately common in Cascade spruce-fir forests, and in mid-elevation ponderosa pine forests and juniper woodlands east of the Cascades.  It is frequent in quaking aspen forests of the Rocky Mountain region.  It occurs at low elevations near the Gulf of Georgia and in boreal forests of British Columbia and northern Washington. This species is usually rare or absent from sagebrush steppe, but occurs sporadically in low-elevation sand dunes in Oregon.

Euxoa comosa is found in forests throughout our region at least as far north as south-central British Columbia. It is most common in mountains and foothills from the British Columbia Coast Range and Cascade Mountains eastward. It occurs uncommonly further west, including in northwestern Washington and in southwestern Oregon. It has only been recorded a few times from Idaho but is likely to be widespread in that state.

The range of this species extends from coast to coast. It is found across the Continent in the boreal zone from Alaska to New England. It is most widely distributed in the West, including on the western Great Plains. The southern limits of the distribution are New Mexico, Arizona, and southern California (Lafontaine 1987).

This species is a soil-surface feeding cutworm that feeds on general herbaceous vegetation including grasses (Poaceae).

Euxoa comosa is found most commonly in late summer from late July to early September, although records span late June to late September in our region. It is nocturnal and comes readily to lights.

This species has been known to damage grass crops on the Great Plains during epidemic outbreaks.