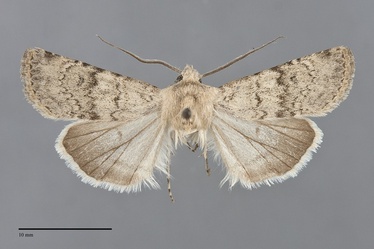 Euxoa lineifrons is a pale, gray-tan, medium–sized moth (FW length 15–17 mm) that flies in dry valleys in eastern Idaho during the summer. It has a simple pattern of toothed dark lines and pale-rimmed spots. The forewing is slightly powdery, nearly even in color, except for diffuse gray in the terminal area and on the costa in the subterminal area. The basal and antemedial lines are similar, dark gray, double with components of unequal strength, and filled with a slightly lighter shade of the ground color. The antemedial line is darkest abutting the median area, oriented nearly straight across the forewing and slightly irregular. The median line is prominent, dark gray, irregular, and oriented nearly straight across the forewing. The postmedial line has a toothed dark medial component and a smooth faint outer component, is drawn basad on the costa, smoothly convex around the reniform spot, and angled slightly toward the base below the level of the cell. The subterminal line is slightly paler than the ground color, slightly irregular with a weak "W" mark on veins M3 and CuA1. It is preceded by a gray shade that is strongest on the costa. The terminal line is dark gray, thin or a series of spots. The fringe is similar to the terminal area. The orbicular and reniform spots are inconspicuous, pale-rimmed. The orbicular spot is absent, a small circle or oval filled with the ground color, or a light smudge. The reniform spot is relatively small, kidney-shaped, and is filled with dark gray. The claviform spot is absent. The hindwing is light tan-gray with a darker gray margin, veins, discal spot, and termianl line. The hindwing fringe is white with a tan base. The head and thorax match the forewing color and lack dark marks. A frontal tubercle is present. The male antenna is biserrate with long fasciculae. Euxoa lineifrons is a member of the subgenus Euxoa.

Euxoa lineifrons can be recognized by the pale gray-tan color, irregular dark gray median line, and indistinct forewing spots with dark filling of the reniform spot. It resembles a pale form of Euxoa comosa and is structurally identical to it (Lafontaine 1987). It might eventually prove to be a distinctive form of that species; however, the situation is complicated because typical dark-brown E. comosa fly in forests near the localities where E. lineifrons occurs. Lafontaine retained the use of E. lineifrons but acknowledged that more study was necessary to fully understand their relationship. Euxoa lineifrons also resembles Euxoa annulipes and Euxoa pallidimacula, two other species with pale forewings and a prominent dark median line. The median line of E. annulipes has a smooth medial contour with a focal concave defect near the posterior reniform spot that E. lineifrons lacks or is part of a more diffuse irregularity of the line. The reniform of E. pallidimacula is pale-filled while that of E. lineifrons is dark.

Euxoa lineifrons is only known from east-central Idaho in the Pacific Northwest.

This species is limited to the central Rocky Mountain region where it occurs in northeastern Utah, central Colorado, and Wyoming outside the Northwest.

The foodplants of this species are unknown. It is probably a surface-feeding cutworm like other members of the genus.