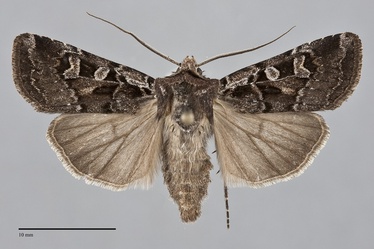 Euxoa divergens is a common, dark red-brown, small to medium-sized Euxoa (FW length 13–17 mm) that flies in mesic forests during the summer. It has a white cubital vein, dark cell, white-rimmed orbicular and reniform spots, and a pale streak in the fold. The forewing ranges from medium dark red-brown to dark gray-brown with a slight reddish tint. The cell is darker, red-brown to brown-black, bordered inferiorly by a pale gray to white cubital vein. The radial vein is pale in some specimens. The costa in the subterminal area and the terminal area except the apex are darker and grayer, and the rest of the costa and subterminal area are slightly paler and grayer in some specimens. A pale ochre streak in the fold extends from the tip of the claviform spot to the postmedial line. The basal and antemedial are double with black and gray components, filled with pale tan or light gray. The basal line is irregular at the cubital vein. The antemedial line is drawn to the orbicular spot on the radial vein, angled toward the outer margin from the cubital vein, often ballooned laterally below 1A+2A, and incurved on the posterior margin. The median line is absent. The postmedial line has a weakly scalloped black inner component and an even gray outer component, is drawn toward the base on the costa, bluntly excurved around the reniform spot, and angled 45° toward the base below the cell. The subterminal line is tan, slightly irregular with an offset below the apex. The terminal line is a series of black spots. The orbicular and reniform spots are partially outlined in black outer and light gray to slightly yellow inner lines and variably filled with the ground color, darker gray, or light gray. The orbicular spot is variable in shape, usually asymmetrically ovoid with the anterior portion tilted toward the base. The reniform spot is kidney-shaped, sometimes with the lower end extended laterally. The claviform spot is black, moderate-sized. The hindwing is dark brownish gray, slightly darker and grayer toward the outer margin, with darker veins, thin discal spot, and terminal line. The hindwing fringe is two-toned gray. The head and thorax are mostly dark red-brown. The base of the collar is paler and grayer and a thin to moderately thick black line traverses the mid-collar. The male antenna is weakly bipectinate, tapering to filiform over the distal third. Euxoa divergens is one of three Northwest species in the subgenus Longivesica. These dissimilar moths share structural characters of a very long male vesica, 2.5–3x as long as the aedeagus, and a long appendix bursae in females.

This species can usually be identified by the combination of dark red-brown color, white cubital vein, and long claviform spot with a pale streak in the adjacent fold. Typical specimens with dark in the cell are usually identified easily. It is most likely to be confused with Euxoa rufula, a less common species with which it flies at some locations. It is similar in but its cubital vein is pale across the median area without reaching the wing base as in E. divergens.  It has a smaller claviform spot without an adjacent pale streak, has a more strongly scalloped postmedial line, and a more irregular subterminal line. Euxoa lewisi is more uniform glossy red-brown and lacks the pale veins. Euxoa cryptica, found only along the east slope of the Cascades in Oregon, is blackish gray rather than red-brown like E. divergens.

This species is widely distributed in coniferous forests throughout much of North America.  In the Pacific Northwest, it is common to abundant in spruce-fir forests and dry, open ponderosa pine forests at middle to high elevations in the Cascades and Rocky Mountain regions.  It also occurs in coastal rainforests, mixed hardwood forests, and in mixed hardwood-conifer forests at low to middle elevations west of the Cascades, but is usually uncommon.  Disjunct populations are found in quaking aspen forests at high elevations in the mountains of the Basin and Range province, including in the Steens Mountains of southeastern Oregon.

This species is found throughout the Northwest in forests. It occurs at high elevations in isolated ranges in southern Oregon and Idaho.

This moth is widespread in North America. It occurs across the northern boreal forest from Alaska to Newfoundland. The southern limits in the East extends from the Great Lakes states to New York. It extends further south in the mountains of the West, reaching southern California near the Pacific Coast and central Arizona and northern New Mexico further east.

The flight period of E. divergens is during the summer, with records in our region from late May through August. It is nocturnal and comes to lights.