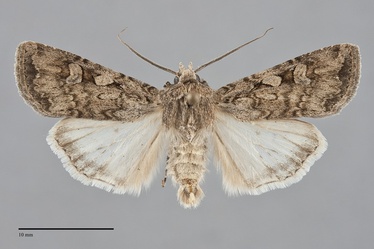 Euxoa messoria is a common, gray-tan Euxoa with variable markings. It is a medium-sized moth (FW length 15–18 mm) that occurs on both sides of the Cascades during late summer and fall. The ground color is fairly constant, medium dark gray-tan to gray-brown, often with darker gray as a spot on the costa in the subterminal area and in the entire terminal area. The cell is variable, most often of the ground color but sometimes dark gray and occasionally black from the antemedial line to the reniform spot. Specimens with a dark cell often have a thin or diffuse black basal dash. Some specimens are slightly mottled and some have a slightly lighter costa on the basal half. The basal, antemedial, and postmedial lines are gray to black, variable in strength but typically darkest abutting the median area, filled with the ground color or slightly lighter tan. The basal and antemedial lines are evenly scalloped; the latter line is slightly tilted toward the outer margin. The median line is gray, diffuse, and very faint. The postmedial line is drawn toward the base on the costa, smoothly curved across the anterior cell, and straight at an slanted toward the base across the rest of the wing. The subterminal line is pale, slightly yellowish, often absent or broken into diffuse spots, waved with concave segments opposite the cell and in the fold and a weak W-mark on M3 and CuA1. It is occasionally preceded by a few black lines across from the end of the cell. The terminal line is thin, dark, interrupted at the veins. The fringe is similar to the terminal area, sometimes slightly lighter. The three spots are often similar, outlined in light to dark gray, sometimes black. The orbicular spot is oval, darkest at the medial and lateral ends, filled with the ground color or rarely slightly paler gray. The reniform spot is strongest medially, kidney-shaped, filled similar as the orbicular spot but sometimes with a gray central lunule or spot at the lower end. The claviform spot is often absent, gray to black when present, small to moderate-sized and narrow. The hindwing is white in males and light gray in females, with a narrow gray marginal band in males up to 1/4x the wing width and a wider band in females about twice as wide. A thin dark terminal line is present at the base of the white fringe. The head and thorax are gray-tan with a thin black line across the distal collar. The male antenna is weakly bipectinate, tapering toward the tip. Euxoa messoria is one of three members of the subgenus Longivesica in the Northwest. All have very long vesicas of the male aedeagi and correspondingly long appendices bursae in females.

This species can easily be confused with a number of other brown Euxoa species, but can usually be identified by the combination of light grayish tan color, an oval orbicular spot with filling of the ground or slightly lighter scales, a scalloped postmedial line that is smoothly curved below the costa and nearly straight to the posterior margin below the mid-cell, and a white hindwing with a thin to absent marginal band in males and a thicker one in females. Even specimens with bold black markings in the cell and a basal dash have these features. Euxoa messoria is often confused with Euxoa septentrionalis and females of Euxoa olivia because these species are common and fly late in the season. Both of them have lighter filling in the orbicular spot than E. messoria, and the spot is round in E. septentrionalis. Euxoa pallipennis is paler gray and has black in the cell without a basal dash. The earliest E. messoria to emerge in the summer could be be confused with Euxoa terrenus, another vary common moth. It is darker brown and has dark hindwings in both sexes. When in doubt the identity of both sexes is easily established by dissection. No other gray-brown Euxoa has as long a vesica or appendix bursae as E. messoria.

This species is common to abundant in open habitats throughout most of North America, and is one of the most destructive of agricultural pests.  In the Pacific Northwest, it is sporadically present in virtually all natural habitats, but is most common in dry, open ponderosa pine forests, juniper woodlands, and on moist sagebrush steppe near wetlands at middle to low elevations east of the Cascades.  However, it often builds up into epidemic outbreaks in various herbaceous crops of disturbed agricultural and urban habitats, particularly at low elevations east of the Cascades.

Euxoa messoria is widely distributed in the Pacific Northwest and occurs on both sides of the Coast Range and Cascades, although the distribution west of the mountains becomes limited to dry grassy areas and beaches toward the northern part of its range. This species occurs most commonly at low and middle elevations.

This species is widely distributed in North America and is one of the few Euxoa species that occurs east to the Atlantic. Its range extends from the island of Newfoundland to Virginia and Missouri in the East, west to the region bounded by Yukon Territory, California, and southern New Mexico (Lafontaine 1987).

This species is a soil-surface feeding cutworm that feeds on general herbaceous vegetation in families such as the Fabaceae, Brassicaceae, Solanaceae, Asteraceae, Lamiaceae, and Poaceae.  During epidemic outbreaks, it will also climb into trees of fruit orchards, causing extensive damage to fruit trees after all herbaceous vegetation on the ground has been devoured.

Euxoa messoria can appear on the wing as early as late June and flies through September. However, the majority of the records in our region are from August to the beginning of September. It is nocturnal and comes to lights. It has also been collected at sugar bait along the east slope of the Cascades.

This is one of the most serious agricultural pests in North America.  In the Pacific Northwest, epidemic outbreaks frequently cause serious damage to various herbaceous crops such as peppermint and alfalfa east of the Cascades.