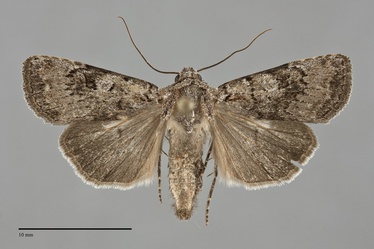 Euxoa faulkneri is a red-brown and blue-gray, small Euxoa (FW length 13–15 mm; Wingspan 32.9 ± 1.8 mm (n = 25; range 29–36 mm) that flies during late summer and fall in the Siskiyou region of southwestern Oregon. It has a forewing pattern that includes an elliptical orbicular spot and dark transverse banding. The forewing is gray-tan with slight reddish flush, usually with an unusual lead-gray color in the antemedial and subterminal areas, an the costa in the median area, and at the apex. The veins in the subterminal area are darker gray, The terminal area is gray. The basal, antemedial lines, and subterminal lines are black and light gray, sharply-defined, darkest on the costa. The antemedial line is mildly to moderately irregular, angled slightly toward the outer margin. The median line is dark gray, prominent, darkest between the costa and the cell. The postmedial line is evenly toothed on the veins, is drawn toward the base on the costa, smoothly and widely arched around the reniform spot, and then straight or slightly concave at an angle toward the base below the spot. The subterminal line is a yellowish, thin, slightly irregular, preceded by a dark gray or dark red-brown shade. The fringe matches the terminal area with an inconspicuous terminal line. The orbicular and reniform spots are partially outlined in thin dark gray or black. The orbicular spot is moderately large, elliptical, often open toward the costa or both anteriorly and posteriorly, filled with light gray. The reniform spot is kidney-shaped, often open at one or both ends, often lined with yellowish scales, filled with the ground color and darker gray at the lower end. The claviform spot is black small to moderate-sized. The hindwing is medium brown-gray with darker gray margin, with dark veins, discal spot, and terminal line. The hindwing fringe is white with a gray base. The head and thorax match the forewing color with a thin to thick black line across the mid-collar. A frontal tubercle is present. The male antenna is biserrate. Euxoa faulkneri is place in the subgenus Euxoa and is a member of the Euxoa infausta species-group. Maculation sharp and in thin black. The reniform and orbicular spots contain some cream to yellow. Collar has a thin, black, transverse stripe. HW pale brown.

This species can be identified by a southwestern Oregon locality, the banded blue-gray, red-brown, and gray pattern, the elliptical orbicular spot filled with light gray. Predominantly blue-gray individuals are distinctive due to this color, the shape of the orbicular spot, and dark banding on the median and distal wing. The most dull and uniformly colored and marked specimens of E. faulkneri can be separated from the most sharply marked specimens of Euxoa infausta by their more reddish color and much thinner black prothoracic black stripe.

This species is narrowly endemic to serpentine soils in southwestern Oregon.  It occurs in oak savanna at low elevations, and on barren, rocky ridgetops at high elevations in the Siskiyou Mountains.  It may be locally common in this restricted habitat.

Euxoa faulkneri has only been collected in the Siskiyou Mountain region of southwestern Oregon where it reaches the northern limit of its range.

The flight period of E. faulkneri is summer to early fall. It is most common during July and August with the flight ending in early September. It is nocturnal and comes to lights.