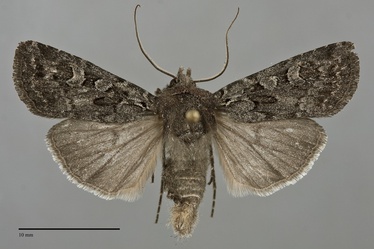 Euxoa cryptica is a medium-sized moth (FW length 16 mm) that flies on the east slope of the Cascade Range in southern Oregon during the summer. It has a powdery, dark blackish-gray forewing with a black and white basal dash and spots outlined in black and light gray. The forewing color is nearly uniform except for a darker shade in medial to the subterminal line. A short thin basal dash is white anteriorly and black posteriorly. The transverse lines are gray, double with strong and weak components, filled with a slightly lighter shade of the ground color. The basal line is irregular. The antemedial line is moderately angled toward the outer margin, and is laterally convex between the veins, bulging strongly above the posterior margin. The median line is absent. The postmedial line lacks an outer dark component, is evenly toothed on the veins, drawn sharply toward the base on the costa, excurved throught the width of the distal cell, and angled 45° toward the base from the level of the posterior cell to the posterior margin. The subterminal line is light gray, powdery, sinuous. It is preceded by a dark gray shade that is condensed into diffuse spots between the veins across the mid-wing. The terminal line is thin, dark. The orbicular and reniform spots are partially outlined by black outer and powdery light gray to slightly yellowish inner scales and are filled centrally with the light gray that fills the lines. The orbicular spot is weakly oval, open toward the costa. The reniform spot is kidney-shaped, often open at both ends or posteriorly. The claviform spot is black, thin, and moderate-sized. The hindwing is gray, darker toward the outer margin, with dark veins, discal spot, and terminal line. The hindwing fringe is two-toned gray. The head and thorax are dark gray with a thin black line across the mid-collar. The male antenna is weakly bipectinate. Euxoa cryptica is a member of the subgenus Pleonectopoda. This genus is characterized by a subbasal twist in the male vesica that is evident when the vesica is everted and inflated during dissection. Many members of this subgenus occur at high elevations and high latitudes.

This species can be identified in its limited habitat by its dark forewing color with black and white basal dash and contrasting peripheral filling of the orbicular and reniform spots. It is very close in superficial appearance to Euxoa tessellata, Euxoa divergens, Euxoa occidentalis, and Euxoa satis, all of which occur in the Oregon Cascade Range. Euxoa divergens is most dark red-brown rather than black-gray and has whitish veins bordering the cell. Euxoa satis has a more strongly oval orbicular spot that is closed anteriorly. Euxoa tessellata is variable in color and pattern. Its forewing tends to be lighter colored and more mottled than E. cryptica, and its hindwing is always lighter gray with a dark marginal band. Males of E. tessellata often have a yellow spot at the base of the forewing. Females of E. tessellata have blunt squared-off ovipositor lobes, visible under magnification without dissection in most specimens, while those of E. cryptica are conical and taper to a rounded point. Euxoa occidentalis is dark charcoal gray, similar to E. cryptica. It has smaller forewing spots and its reniform spot is less strongly indented laterally and usually lacks a black outline.

This species occurs in dry forests at higher elevations in the Cascades and Sierra Nevada of Oregon and California. In Oregon, it is particularly common in dry lodgepole pine forests on volcanic ash and pumice soils at middle elevations along the east slope of the Cascades.

Euxoa cryptica is limited to the east slope of the Oregon Cascades and adjacent central Oregon in the Northwest.

The range of this species is narrowly limited to the Sierra Nevada outside of our region.

Adults are single brooded and fly during the summer. They have been collected from June to late August in our region. It is a nocturnal species and comes to lights.